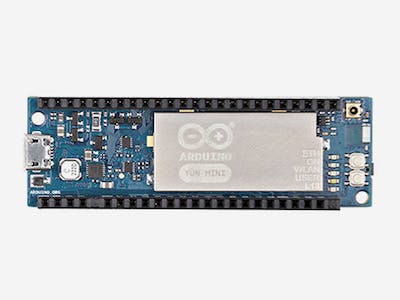 Arduino Yun Mini is a breadboard PCB developed with ATmega 32u4 MCU and QCA MIPS 24K SoC CPU operating up to 400 MHz. Qualcomm Atheros CPU supports a Linux distribution based on OpenWRT named Linino. The board has built- in WiFi ( IEEE 802.11b/g/n operations up to 150Mbps 1x1 2.4 GHz ) supports 20 digital input/output pins (of which 7 can be used as PWM outputs and 12 as analog inputs), a 16 MHz crystal oscillator, a micro USB connector, an ICSP header, two reset buttons and one user button.

The Arduino Yún Mini is similar to the Leonardo in that the ATmega32u4 has built-in USB communication, eliminating the need for a secondary processor. This allows the Arduino Yún Mini to appear to a connected computer as a mouse and keyboard, in addition to a virtual (CDC) serial / COM port.

A taxi meter-like system using RFID prepaid card, speedometer GPS, accelerometer, and RPM counter. I use it on my boat to bills my customer.