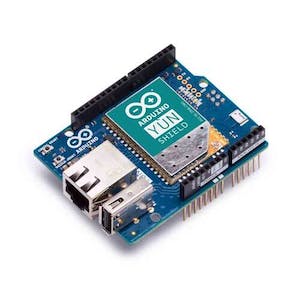 The Arduino Yún Shield extends your Arduino board with the power of a Linux based system that enables advanced network connections and applications. The Linux system is based on the Qualcom Atheros AR9331 System on Chip processor and OpenWrt-Yun, a linux distribution based on OpenWrt. The Shield provides a wired Ethernet port, a Wi-Fi interface and a USB-A port.

The software created for the Arduino Yún board is compatible with the Arduino Yún Shield, and since it can be matched to a more powerful Arduino board like Arduino Due and Arduino Zero it enables more advanced applications.

Ever wanted to know the temperature of your home from somewhere? Here's an easy way to do it with Arduino Cloud and the Yun Shield!

Know the Temp of Your Home From Anywhere with Arduino Cloud!

Take photos using a PIR sensor as a trigger, and upload them on tumblr.

Using an Arduino Yun Shield, I took my last project and made it Internet-connected!

I built a robot at Aerobotics Global.