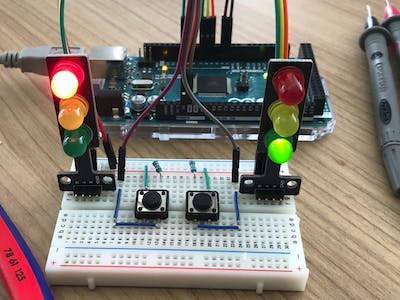 Pedestrian traffic light for an Arduino by using YAKINDU Statechart Tools to implement a Finite State Machine (FSM) in C and C++. 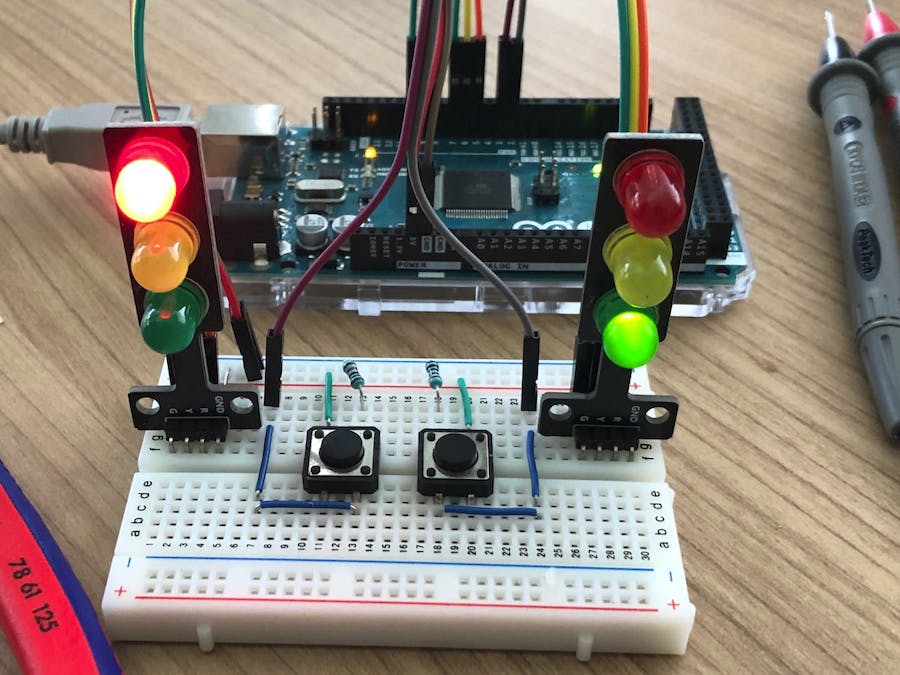 Pedestrian traffic light for an Arduino by using YAKINDU Statechart Tools to implement a Finite State Machine (FSM) in C and C++.

I'm going to show you how to program a pedestrian traffic light for Arduino for C++ with a finite state machine by using YAKINDU Statechart Tools. This will demonstrate the power of state machines and can be used as a blueprint for further projects.

At first, I need to specify how the pedestrian traffic light should work. I've tried to summarize the bullet points:

Additionally, there are some time events depending on the way of how a traffic light works.

Let's start set up the circuit. In my example, as you can see on the preview image, I've used a Arduino Mega 2560, but every other Arduino with at least eight GPIOs should be fine. Additionally, I've bought some 5V traffic lights at Amazon. Just search for Traffic Light Arduino. Otherwise, you can simply use six different LEDs. Furthermore, you need two push buttons and two 10k Ohm resistors.

The three left LEDs are used for the car traffic and the three right LEDs for the pedestrians, where the yellow one can indicate a request.

There are different approaches of how to define and implement the state machine. In this case I have chosen YAKINDU Statechart Tools, which allows to graphically create the model and generate C/C++ code.

So, as you can see there are two main states with composite members - state on and state off. You can switch between both states by using the event onOff, which is wired to the ON/OFF button. In the initial state, the off state, both yellow LEDs start blinking every second. Once the traffic light has been turned on, it starts in the Safe state. After 10 seconds the typical behavior of the traffic lights will be handled. The red and yellow LED will be turned on in the StreetPrepare state and the traffic light turns green after 2 more seconds. From now on, the state machine is waiting for the pedestrianRequest event, which is wired to the second button. After sending the event the request will be indicated by toggling the yellow LED every second in the PedWating state. 7 seconds later the traffic light will be switched to yellow first and then to red, until the pedestrians get the signal to go in the PedestrianGreen state. After this the PedestrianRed is activated and the cycle repeats. This can only be interrupted by turning the traffic light off again.

The generated C++ code is a classic switch-case to handle the logic of the state machine. This is just a code snippet of how it looks like:

The whole example is ready to compile & run. It comes with YAKINDU Statechart Tools, which is free for non-commercial use. After downloading, you can import the example directly in the tool:

The example is also available in C.

Trying to find a way to surprise your friend on their birthday? Searching for a creative way to celebrate Christmas? Look no further!

Intro to using FSMs in your IoT projects.