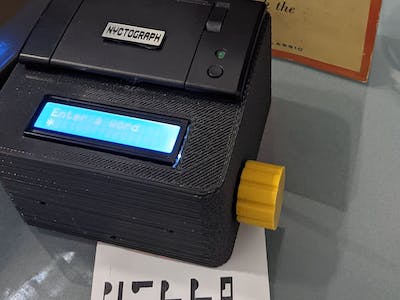 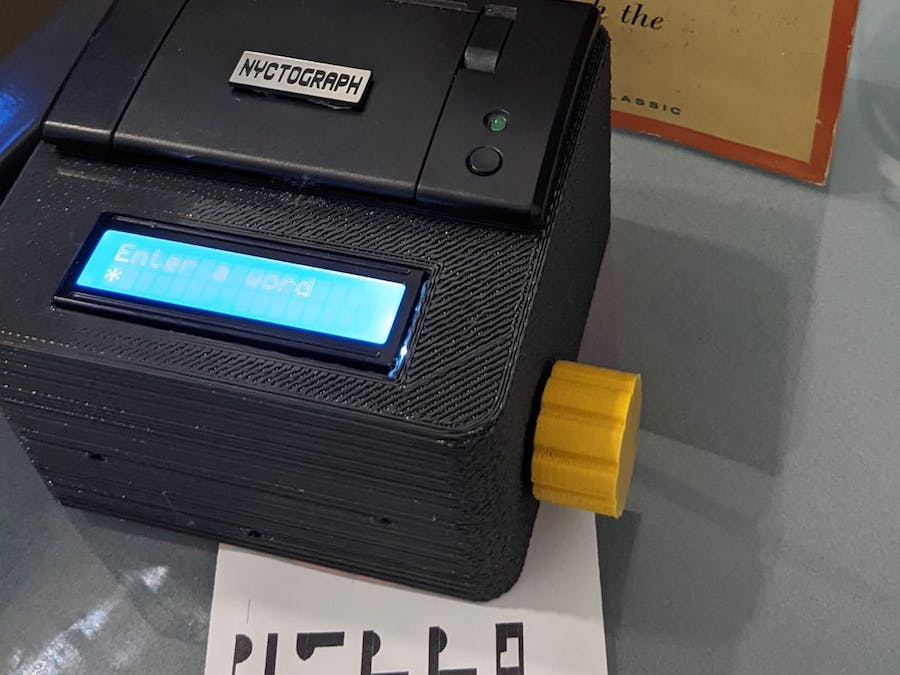 The Nyctograph Machine © CC BY

Well… it turns out that Lewis Carroll was also a mathematician and inventor.

What did he invent? Nyctography, a card containing a grid of cells to guide the writing of notes in the dark, using a peculiar alphabet.

“Why not invent a square alphabet, using only dots at the corners, and lines along the sides?’ I soon found that, to make the writing easy to read, it was necessary to know where each square began. This I secured by the rule that every square-letter should contain a large black dot in the N.W. corner. … [I] succeeded in getting 23 of [the square letters] to have a distinct resemblance to the letters they were to represent.”

Nowadays, of course you can easily write in the dark with your phone or even use text to speech but I like (almost) useless machines and inventions that combine literature and technology - Rayuelomatic, The Klausner Machine, Haiku Reader and Jorge Luis Borges Animatronic -so I’ve decided to make the Nyctograph Machine, which is a small device, capable to translating from our alphabet to nyctography in order to print banners.

Using the wheel you can enter a word or small sentence up to 16 letters. When the cursor reaches the end of the line, the word or phrase is ciphered by sustitution and then printed using thermal paper.

Why 16 letters limit? Well... the original Nyctography card had 8x2 cells, LCD screen has 16 characters and both "The White Rabbit" and "El Conejo Blanco" (spanish translation) have... So... that's it.

I’ve exported every "nyct" letter to bmp, 104x104 pixels, 1 bit, then assigned all of them to arrays. I’ve started with Arduino Nano but run out of memory around letter H, so I’ve moved to Arduino Mega.

Rotary encoder with push button was ideal to load letters.

Code has a debug mode, which prints the entire alphabet for reference purposes.

PDF User's Guide can be downloaded from here...

Source code can be found at https://github.com/ronibandini

Another metaphoric machine that does nothing—absolutely nothing—except switching itself off.

A medicine vending machine to store and give doses via medicine bottles and alert patients at prescribed times.

Read brain waves and prints poetry on a small screen as long as you are focused and concentrated.

Based on Roald Dahl short story, this machine will let you "hear" plant mood according to soil moisture.

ATM is an Arduino based split flap display which aims to give users a satisfying tarot card reading experience.

Project in progress by i_mozy