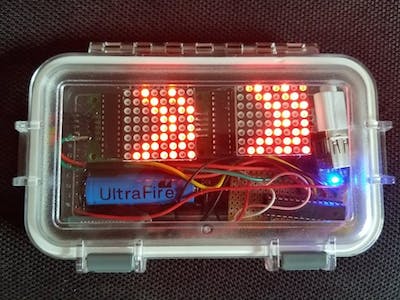 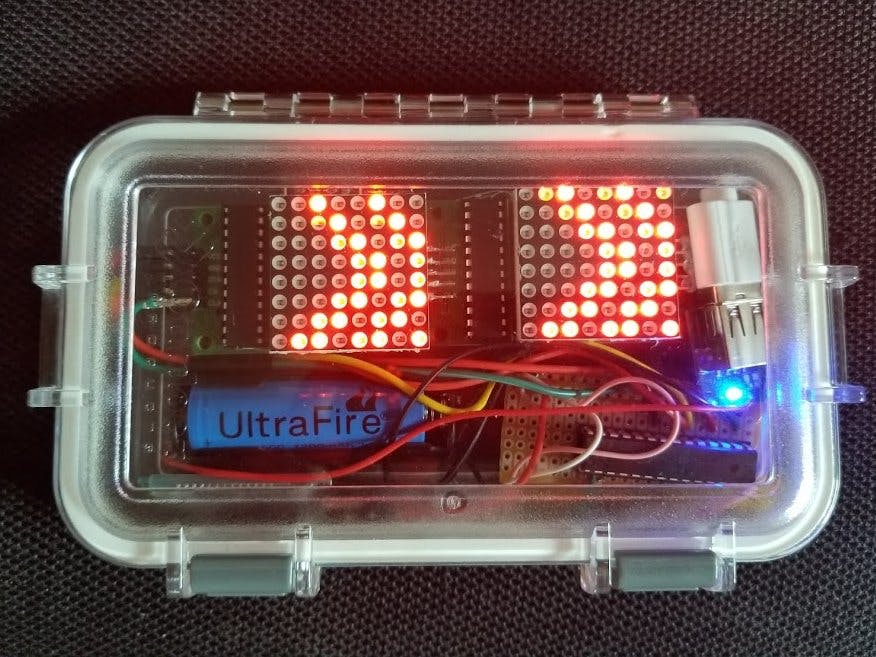 After commuting to work every day on my bicycle, I decided that I needed a better way to signal my turns. Sticking my arms out can be dangerous, especially if you're riding downhill in the rain (as is common in Vancouver).

I had recently got an Arduino and wanted to embark on my first project, so I decided to kill two birds with one stone!

I wanted something waterproof that I can use in the rain, and something detachable so it wouldn't get stolen, it needed to be detachable/wireless.

The plan was to have a couple of switches embedded into the handlebars (for power and for turn signal), use a Bluetooth transmitter (HC-05) for communication, and have an Arduino Nano to control it all with an 18650 lithium-ion battery (controlled with a 134N3P chip) for power. On the other end of the bike, there are two 8x8 LED matrices controlled by MAX7219 controllers, a Bluetooth receiver (HC-05), an ATMEGA328P chip to control all the components and an 18650 (or 14500) lithium-ion battery for power. I also added a Qi wireless charging receiver to charge the battery without opening the lights enclosure.

Video of the setup in action

A closeup of the case with all the gubbins:

If you don't like my boring arrows, make any indicator animation you want using my 8x8 LED byte generator found on my Github:

Diagram for the lights:

Pictures of the build:

Testing lights before gluing everything and closing the case:

It's working! Time to mount it to my bike:

Message me for more details if you want to make one for yourself.

Code for lights and handlebars 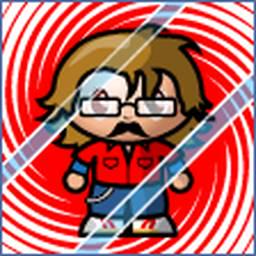 Cars have turn signals, why not bikes? LightVest is an Arduino turn signal bike safety vest designed to be a wearable tech for cyclists.

Easy implementation of Rev-limiter for Automotive or Motorcycle Engine.

A dashboard for a bike that displays speed and time and can also track your route.

How to Make a Speedometer/Tracker for a Bike