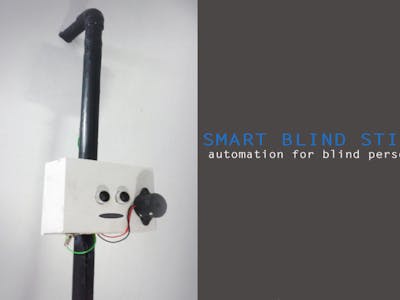 This is a simple and effective project for beginners using Arduino and an ultrasonic sensor. It only takes a half hour to make this project. 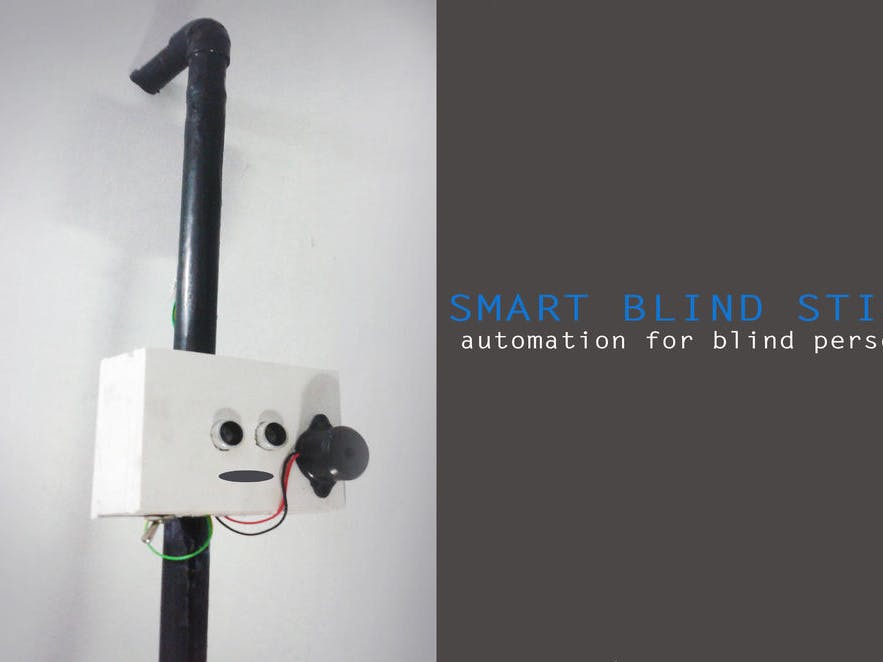 This is a simple and effective project for beginners using Arduino and an ultrasonic sensor. It only takes a half hour to make this project.

Today in this project we are going to make a smart blind stick for visually impaired persons.

Have you noticed blind people?

Their life is full of risk. They can't walk without the help of others. Their lives always depends upon others. Let's make something for them. Yesterday when I was walking to my college, a blind person who was walking through the street. He faces difficulty walking on that busy street. Fortunately I could help him at that time. At that moment, I also thought I needed to do something for blind people. In the evening of that day I came up with this idea: the smart blind stick. My aim is that this can be cheap and easy-to-make. Even a kid can make it easily in a couple of hours from scratch.

Using this smart blind stick, a visually impaired person can walk without anyone's help. The smart blind stick automatically detects the obstacle in front of the person and gives a response to the person by vibrating the stick and with a warning sound.

Through this the blind person can be aware of the obstacles in front of him.

I used an ultrasonic sensor for detecting the obstacles. It cost me just 10$ to make one.

So, it is cheap and also easy to make - not need for much soldering.

Keep reading to find out how to make it!

Firstly, we need to collect all the parts that we needed.

Here are the parts you need to collect:

Other tools and parts used in this project:

I thinks that's all we needed.

After collecting all the parts that we need, let's go to the next step!

Do this step with care and patience.

Now solder the motor on a small piece of general purpose PCB, then solder two wires to the terminals of the motor like shown in the above images.

Now it's time for wiring the Arduino!

See the above schematics and carefully connect all parts to the Arduino.

I used a mini breadboard to connect the ultrasonic sensor to the Arduino using jumper wires. The other parts like the buzzer and motor are directly connected to the Arduino.

It's pretty easy does not have complicated wiring.

You can see the wiring diagram from the above image. Here I will explain part by part:

Now we finished the wiring!

Now it's time for uploading the sketch to the Arduino. The Arduino code is attached with this project. Just copy and paste the code to your Arduino IDE and plug your Arduino into the PC. Just click the upload button. After successfully uploading, unplug the Arduino board.

I used a PVC pipe for making the stick.

If you have a walking stick lying around your home, use that, or else follow this step. Take a look at the above images to make the stick.

I used a 3/4 inch diameter PVC pipe and a 'L' shaped elbow for making the stick.

I will describe to you in words how to make one:

I just wrapped the stick with black insulation tape. No specific reason for that except that I like the color black. You can even use paint to get a cool look.

Step 6: Fitting the Circuit on the Stick

Now its time for fixing everything on the stick.

This is the hardest step in this project. It took me hours to design and fix the parts onto the stick.

Find a box yourself that we can use to put all the electronics together. I used a foam board to make a box myself. You can also simply do that (I don't think you need a explanation for that).

Fix your Arduino into the box, use screws for a strong fixing. Make two holes for fixing the ultrasonic sensor on the closing lid of the box as shown in the above image. I fixed the buzzer outside of the box for a clear sound. I also fixed the toggle switch onto a side of the box and a small hole for connecting the vibrating motor to Arduino. Fix the battery inside of the box and connect the power jack to the Arduino.

Now attach the box to the stick, you can either use screw or glue it. Here I used a instant adhesive glue, because it is very strong.

this is the arduino code for making the blind stick

Download
this is the schematics to connect components with arduino 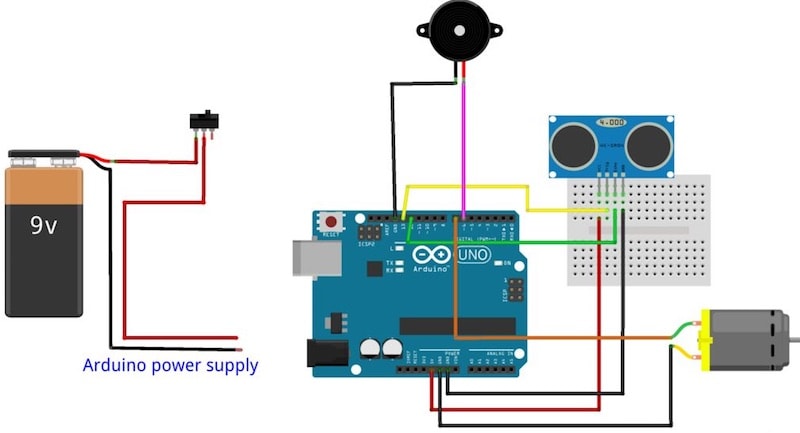 Arduino-based smart home hub allows you to control your devices remotely from outside and monitor your home environment from your phone.

In this tutorial, we are going to see how to build a very useful distance meter with a big Nokia 5110 LCD display using Arduino.

DIY Distance Meter with Arduino and a Nokia 5110 Display