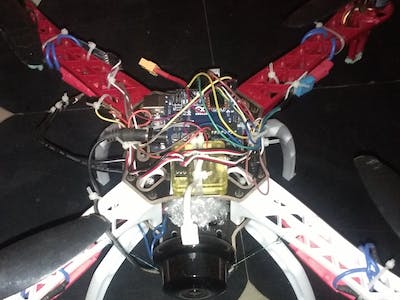 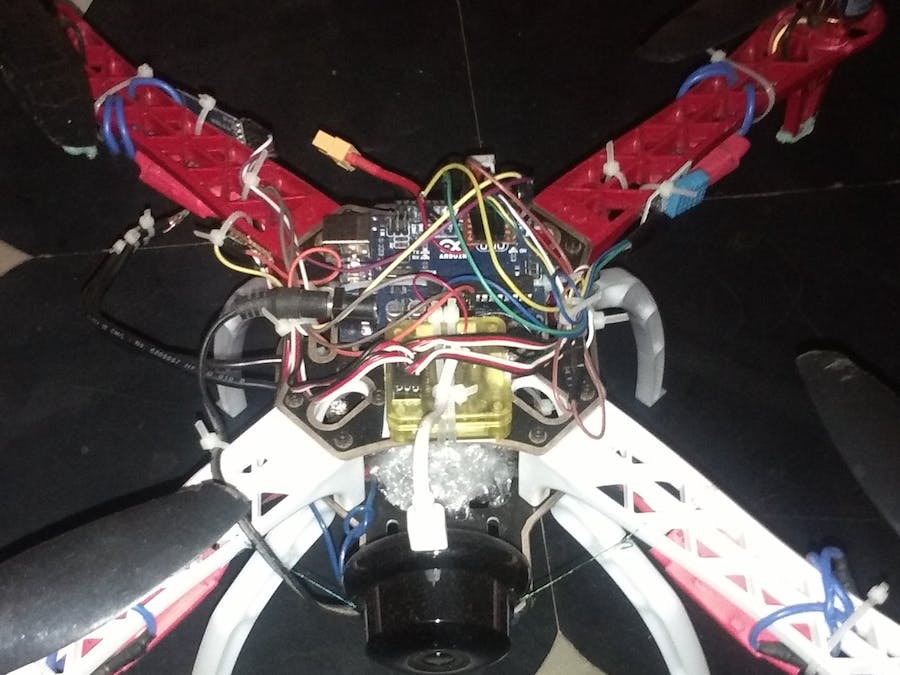 Normally we see drones controlled using an RF remote, or for autopilot using a GPS module to control it automatic by giving proper direction by it. But in my project, I have gone about things in another way using an Arduino Uno.

The main objective of this project is to collect data and 2D video information from a particular known area. In order to get the information, we must to assign the values of length and width that the drone can travel using Arduino programming.

As its name suggests, autopilot means that the drone will be handled by itself, while controlling action of the drone will be handled by a flight controller that has built-in sensors to balance the drone. An Arduino Uno is the brain of the system, which gives the proper signal to flight controller. To maintain stability and sustained operation, I used an OpenPilot CC3D microcontroller (or any flight controller), along with a camera to capture live data with weather monitoring sensors. Finally, the system includes a Bluetooth module to turn the dronon/off and display the live data using a Android mobile device.

as we know the arduino Uno is a Atmega Micro controller. here i generated PWM signals to control the Drone.

as we seen in above fig shows the a flight controller which having inbuilt gyro and accelerator controller and auto leveling features.

But these micro controllers company provides its own software to program it, and its is user friendly to use.

these micro controller needs a PWM signals for input to control the individual BLDC motors. these signals will be generated by arduino uno.

as you see above there are two types of drone designs available for quad format drones, depending upon what direction you place the flight controller you can chose the quad format

the direction indication will be printed with respect chosen flight controllers, with respect to the chosen format the propeller direction also most important, CW (clock wise) and CCW (counter clock wise).

Clock wise we need to connect the wires as shown above

ESC also having a 3 wires with 2 power cables,

these 3 wires having VCC, GROUND and INPUT SIGNAL pin which takes data from FLIGHT CONTROLLER to spin the BLDC Motors.

other 2 Wires are power cables rated for higher current so use thicker wires, and these cables are common with the battery.

here i used a UART protocal but no data is converted parallel to serial. direct PWM signals are applied from arduino to CC3d with respect to delay.

the above snap show the android application which is build using an open source website which mentioned below. using this app we can turn on and turn off the drone. and having another feature which makes we can get the sensor data in the serial window, that is a mobile phone.

start : this button will boots up the micro controller (CC3D flight controller)

mov : this makes drone to fly and does its operation which is programmed inside the arduino Uno

stop : it is a emergency stop button to turn off the drone (due to auto pilot drone no remote controller is present so provided extra button)

start sensor : when it pressed it displays the sensors data on a white screen which is shown below figure

we can see in that figure the temperature and humidity of values will be displayed when start sensor button is pressed.

Download
here we use a Bluetooth module (HC-05) for bidirectional communication purpose, for turn ON the drone and to receive the sensor data's.
two resistors are used as a voltage divider to step down the 5 volts to 3.3 volts so that Bluetooth can receive the data from the Arduino Uno.
The circuit is so simple and small , there is only few connection to be made
Arduino Pins Bluetooth Pins
RX (Pin 0) ———-> TX
TX (Pin 1) ———-> RX
5V ———-> VCC
GND ———-> GND 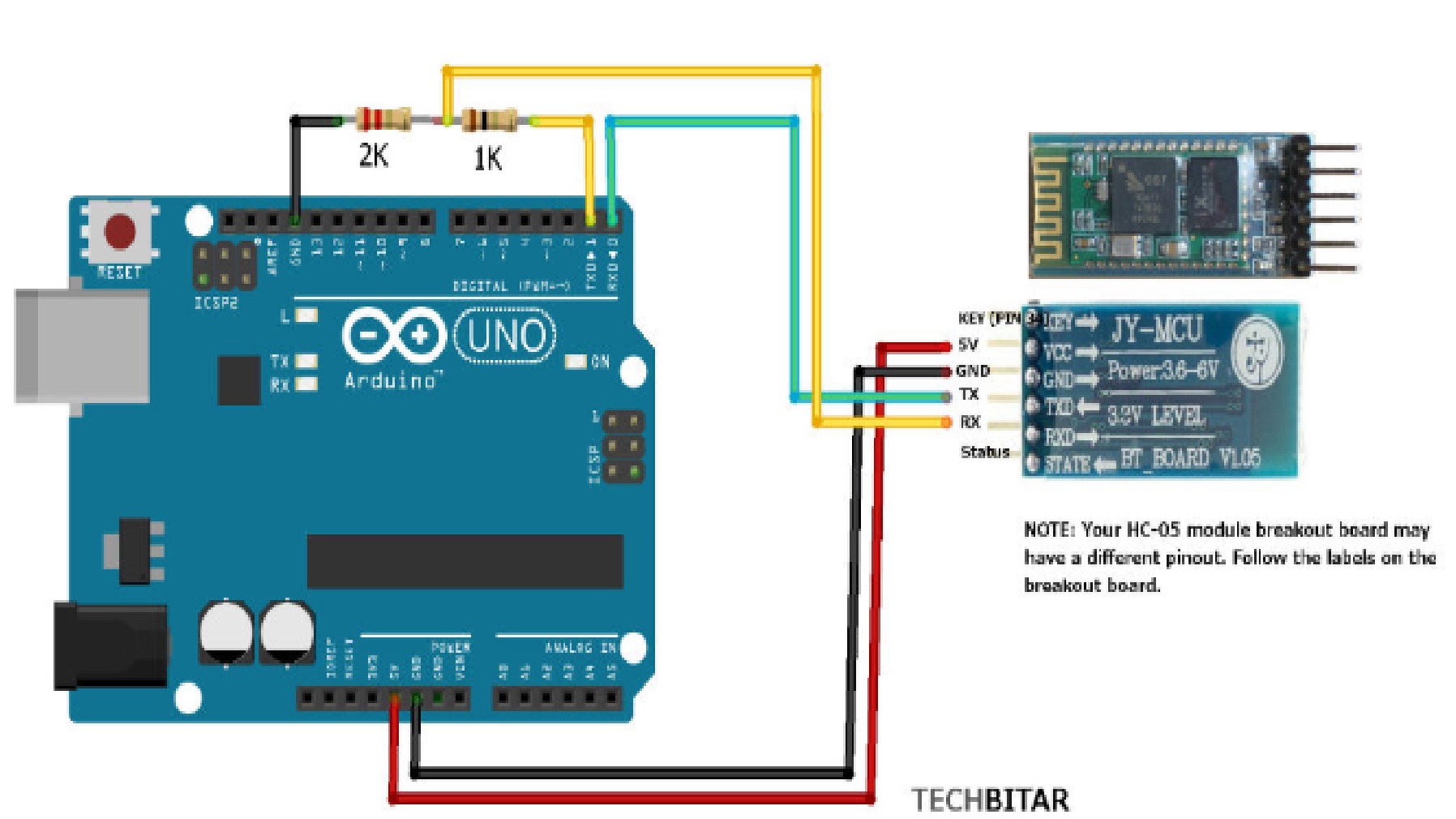 Download
The DHT11 measures relative humidity. Relative humidity is the amount of water vapor in air vs. the saturation point of water vapor in air. At the saturation point, water vapor starts to condense and accumulate on surfaces forming dew.The DHT11 uses just one signal wire to transmit data to the Arduino interface diagram is shown in above fig. Using DHTLib library. It has all the functions needed to get the humidity and temperature readings from the sensor which is shown below program. 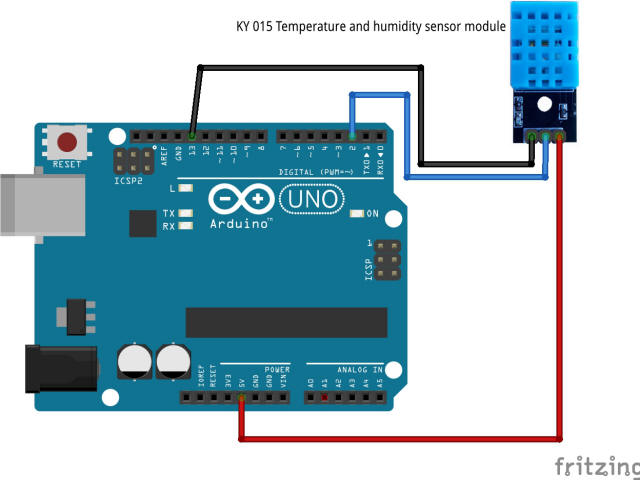 Download
The flight controller (Cc3d) will provides 5 input control pins which gives the 4 movement actions to the drone they are throttle, roll, yaw, and pitch. These pins need a PWM signal to work, so we will generate the PWM signal using Arduino Uno. By proper planning and sketch of a particular are we can program the Arduino by calling function with delay. 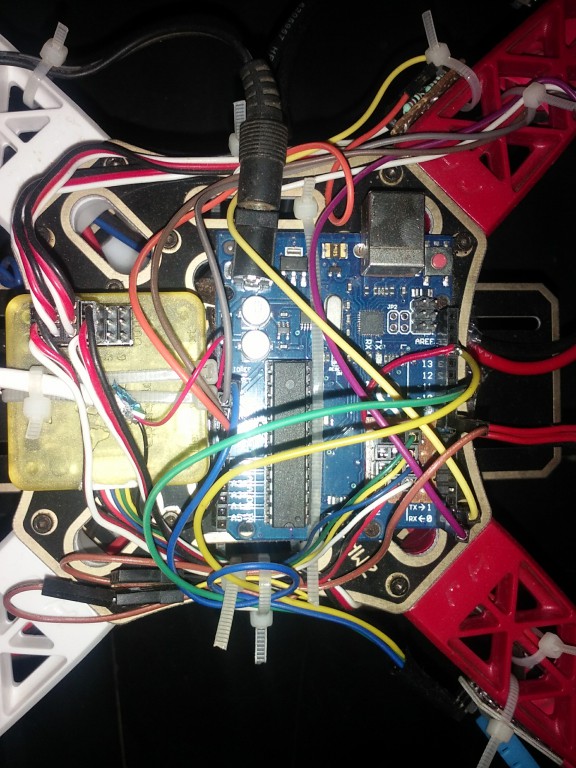 This is one of my personal budget/project made for University to graduate. This Airplane (UAV) is made fully homemade using only Arduino.