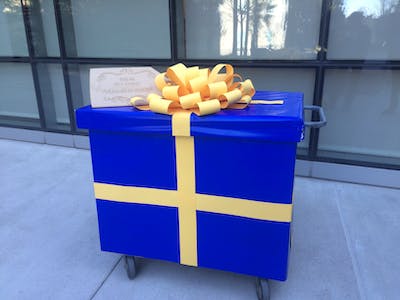 Project tutorial by Those Peddling Kids 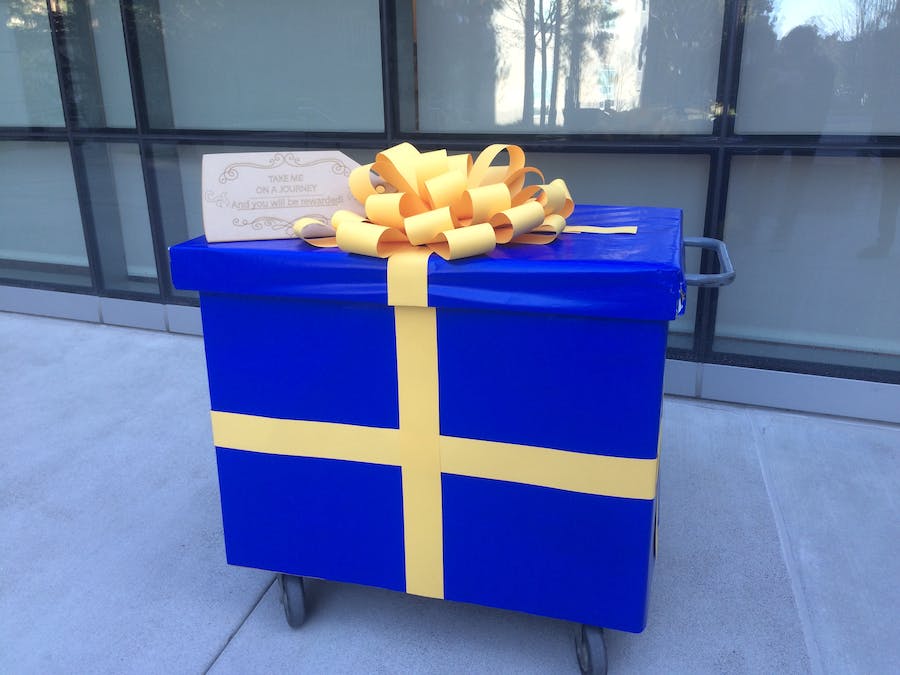 Dora (Greek: Δώρα) is a female name of Greek origin, meaning “Gift”. It also alludes to a precocious cartoon child with a monkey sidekick, delighted by exploring the world.

Dora is a traveling giftbox, meant to encourage people to move and explore the space around them and spread a little joy in their community.

Dora comes with her own Twitter account and website where she pings and maps her current location for people to find her along with an opinion or interesting fact. Once someone approaches her, she greets them and expresses her desire to go somewhere nearby. Once the destination has been reached, the user can pick a gift from the box and leave behind a present for the next person to find.

Inspired by the integration of social media in the food truck industry and gift exchange activities like Secret Santa, Dora aims to engage people to move through their environment and impact it positively.

Our design process started with a lot of brainstorming where we listed all possible human powered transportation we could think of and suggested factors we would like to sense. We explored combinations of these two categories to come up with a wide variety of ideas such as a wheelchair that mapped out the most accessible routes, a walker to communicate with loved ones, a baby walker with educational feedback, a pair of skates that tracked your routine to create abstract art and a skipping rope to sync workouts with friends.

Out of our large number of ideas, we liked the idea of using a food cart and reinventing the cart experience and strongly integrating social media and geographical interaction.

We followed an iterative process to conceptualize Dora, starting out with an old food cart and working around its physical constraints (its open structure with a top layer tray was contrary to the open top box we needed).

We also brainstormed a number of themes we could design and brand the box with, to help it evoke interest in passers-by. Some of our ideas were a pirate ship, Santa’s sleigh, a treasure chest and a gift box. The last idea seemed the most friendly, approachable and sturdy structure to build.

Given our gift box idea, we first wrapped the box in wrapping paper but quickly figured it was a flimsy structure.

We then built a cardboard box shell fitted to the cart. We proceeded to wrap the box and lid in blue and gold to make the box seem at home at Cal, and stand out brightly. And every good present, needs a great bow.

We started off by gauging people’s reactions to the concept and researching projects like the Hitchhiker robot to understand how people usually engaged in these interactions. We realized that people were quite taken with the idea of having a ‘gift movement’ and searching out the cart from a Twitter feed much like a treasure hunt. We also observed that a lot of students don’t explore the campus a lot and tend to take the same routes to and from class.

Since we were designing an object for a design space we found interesting, our observational research came mainly from using a rudimentary prototype in action.

While people were a bit confused by the structure of the cart (not being able to lift the lid and look into a hollow space), they got the idea fairly well from the sparse instructions (though, we solved this problem by adding a QR tag that linked to Dora’s website of instructions and journey map). People also felt the need to push Dora a good distance to a place they thought was significant or popular enough. We later added Dora’s audio functionality of being able to prompt the user to take her somewhere interesting on campus to give the user a clearer sense of destination.

How to build Dora?

1. Build the cardboard lid by cutting out a large, flat rectangle and cutting slits to fold.

2. Measure and cut cardboard sides to be the size of the cart sides.

3. Wrap the cardboard with wrapping paper.

4. Attach 3 sides of cardboard to the cart with duct tape.

5. Create the bow by cutting strips of paper, folding them in half, and stapling multiple strips together in a circular fashion.

8. Connect the sound board to the arduino following instructions here: http://make.berkeley.edu/wp-content/uploads/2014/02/Critical-Making-Audio-How-To.pdf. Also attach a 330OHM resistor and a photo sensor to digital 0.

9. Download the arduino code attached to hackster from below and upload it to your chip. We used digital 0 for the light diodes and digital 2 for sound. At this point, if you approach the photo sensor, the instructions should begin playing via the speaker. The GPS coordinates should also be logged in serial and the PeddlingDora twitter account will have tweeted its location the moment the code is uploaded to the chip.

10. Place electronic components inside the cart, from the back side which is open. Make sure the speaker points outwards so that sound will be heard when Dora speaks her instructions.

11. Laser cut two simple instructions to place on the cart, one near the handle, and the other on the back side of the cart, where the person would lift up the lid to find and place a gift.

12. Laser cut a tag for the gift box, and attach it to the bow with some yarn. The tag gives the sense of a “to” and “from” tag, but also draws attention with its catchy phrase on the front and the name “Dora” on the back.

13. Laser cut a QR code for the website and Twitter page, and attach it onto the top of the cart, on the lid of the gift box. Although Dora speaks instructions to you, you can choose to read the step by step instructions on the website, and follow her on Twitter to improve interaction with her.

Dora employs a couple specific hardware and software components to operate. One of Dora’s main feature is that she tweets the location where she is at so Cal students around campus can find out. To do that, we used an arduino + C3000 + GPS breakout. The C3000 is used to connect to the WiFi and the GPS Breakout logs the GPS location of Dora continuously. We send out a tweet of where Dora is every 15 minutes or so in order to always be present on people’s feed. To do this, we set up a django server on heroku which accepts an latitude and longitude input. The C3000 chip then sends the GPS coordinate to the server once every 15 minutes. The django server then parses the coordinates, generate a map url using google map’s API, and tweet out one message out of the array of random messages such as “I know where the treasure’s at!” and “Take me exploring!”. Additionally, Dora now also comes equipped with a speaker. Using photo sensors, when people approach Dora’s handle, it plays an audio file telling where the person should take Dora and the instructions behind Dora.

Dora in the Wild