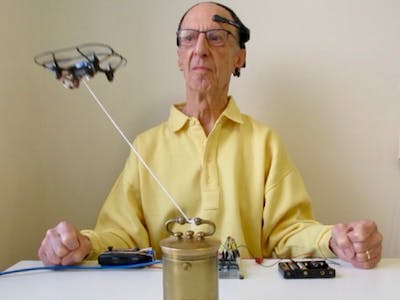 Drones are fun to fly, and it’s possible to do limited flying using brainwaves. 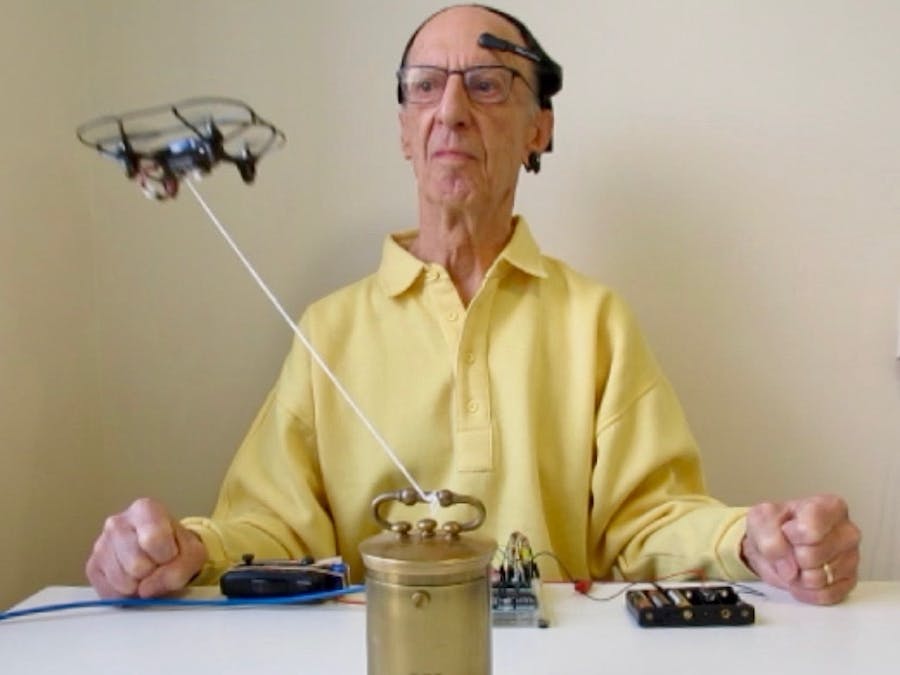 Drones are fun to fly, and it’s possible to do limited flying using brainwaves.

The headset is a NeuroSky MindWave Mobile 2, the computer is an Arduino Uno microcontroller, and the Bluetooth module is an HC-05.

There are 6 main steps in this project:

Wire the HC-05 to the Arduino

Configure the HC-05 and pair it with the MindWave.

Connect the servo to the drone controller.

The Arduino Sketch (The Code).

Upload the Arduino sketch and use it.

If you’re not familiar with these devices, the following links may be useful:

Getting started with Arduino: https://www.arduino.cc/en/Guide

Differences between the 4 models of MindWave: http://support.neurosky.com/kb/mindwave-mobile-2/whats-the-difference-between-mwm2-mwm-and-original-mwm

NeuroSky’s Arduino project (it uses a BlueSMiRF Blluetooth module instead of the HC-05 I used. The sample code (which runs on an Arduino) should work okay regardless of the type of Bluetooth module.):

PARTS for the electronics:

A computer (I used an Apple iMac)

Arduino Uno or another model and its USB cable

Power source, about 5 volts, such as 3 AA batteries in a holder

PARTS for the servo connection to the drone’s controller:

A few websites describe how to set up an HC-05 Bluetooth module for the NeuroSky MindWave, but none of the methods worked for me. Maybe the reason was that my HC-05 has a newer version of firmware? Or my MindWave is a newer model? Anyway, I researched other Internet websites for info about configuring and pairing an HC-05, and eventually figured out how to do it.

Photos of the front and back of an HC-05 are shown.

Plug the HC-05 into the breadboard and connect it to the Arduino as described below and shown in the photo.

Find the sticker on the MindWave showing the Bluetooth address. This will be needed in one of the HC-05 commands. If your MindWave doesn’t have a sticker, NeuroSky’s Arduino project describes how to determine it, under the title “Determining the MAC address of your MindWave Mobile” in this website:

1. Start the Arduino app on the computer.

2. Connect the Arduino’s USB cable to the computer. The green light on the Arduino should be on.

3. Download the sketch.ino file located in Attachments, or copy the following code, which relays data between Arduino’s Serial Monitor and the Bluetooth module, and paste it into a new Arduino sketch.

I found the code in the following YouTube video:

4. Upload the sketch to the Arduino.

5. While pressing the small button over the EN pin on the HC-05, connect HC-05‘s VCC to Arduino’s +5v and keep the button pressed for a few seconds until the red light on the HC-05 begins to blink on for 2 seconds and off for 2 seconds.

7. Click inside the input line of the Serial Monitor window. Type AT on the computer’s keyboard and press Return. If the response is “OK” then continue. If it’s not “OK” then try again. It sometimes doesn’t work the first time.

9. Type AT commands as shown below. The response should be “OK” after each command.

AT+ROLE=1 Sets the HC-05 as Master rather than Slave.

AT+CMODE=0 To connect the HC-05 to a specific device.

AT+CLASS=0 Specifies the Class of Device.

AT+INQ To see if the HC-05 recognizes the MindWave. This may take 15-20 seconds to find the MindWave. One of the displayed devices should have the same address as on the MindWave sticker, in the format xxxx:xx:xxxxxx. This address is used in the next 3 commands (shown as addr) except the colons must be replaced by commas.

10. The red light on the HC-05 should make 2 quick blinks every 3-4 seconds. The first time I did the LINK command, the red light didn’t change. So I double-checked the wire pins were pushed down properly on the Arduino and breadboard, pulled out the +5v wire from the HC-05, did step #5, and typed the PAIR, BIND and LINK commands. This time, the red light changed to 2 quick blinks every 3-4 seconds. This means the devices are paired. Next time you use the devices, they will pair automatically within a few seconds.

14. Disconnect the USB cable from the Arduino or the computer.

Step 3: Connect the Servo to the Drone's Controller

There are two ways of connecting to the drone controller:

The controller could be hacked as follows: Remove the potentiometers that the joysticks are attached to, and connect the Arduino to the controller’s circuit board where the middle pins of the potentiometers had been connected. The following website has excellent instructions for this hack: https://www.hackster.io/WesleyCMD/mind-control-drone-c8b28aThe project uses only the Attention level signal from the brainwave headset.

My drone controller is so small that I thought the potentiometers would be tiny and too difficult to extract. So, I decided to use a servo to move the joystick for the drone’s throttle, based on the Attention level signal.

Eye-blinking can also be detected by the MindWave headset, but from what I have read, obtaining the Blinking signals and making use of them seems much more complicated than the Attention and Meditation signals.

If you decide to do something similar, the connection between the servo arm and joystick could be very different, depending on the size and shape of your drone controller.

Starting with the circuit after step #11 in Configuring and Pairing the HC-05 (above) the additional wiring should be as described and shown in the photo.

Step 5: The Arduino Sketch (The Code)

When Attention is high, the code will turn on 2 LEDs and move a servo arm attached to the throttle joystick of a drone controller.

The code has the following main functions:

Download the sketch.ino file located in Attachments, or copy the following code and paste it into a new Arduino sketch:

/*When Attention is high, this code will turn on 2 LEDs and move a servo arm

attached to the throttle joystick of a drone controller. December 26, 2020.

Yellow LED on when Attention is more than 50

Green LED on when Attention is more than 70

int val; // variable to read the value from the analog pin

Serial.begin(BAUDRATE); // baud rate for the MindWave

////// Look for sync bytes and read data from the MindWave

////// Obtain Attention data and display it in the Serial Monitor

val = analogRead(potpin); // read the value of the potentiometer

// The potentiometer adjusts the maximum throttle. With a fully

// charged drone battery, the potentiometer should be at its

// mid-point. As the drone’s battery is being used up, the

// potentiometer should be turned higher.

// This makes the servo move a maximum of 30 degrees. My

// throttle joystick doesn’t allow any more movement than that.

digitalWrite(YLED, LOW); // turn yellow LED off if Attention is 50 or lower

else // turn green LED off if Attention is 70 or lower

Step 6: Upload the Arduino Sketch and Use It

The Arduino could be used with separate power instead of the USB connection to the computer. The only difference would be that there is no Serial Monitor to display data.

Ways to maximize the Attention level vary for different people. Here are some suggestions:

When I researched NeuroSky projects on the Internet, it was interesting to see which signals the developers chose to use in their projects. Most projects used only Attention and a few also utilized Meditation and/or Blinking.

I plan to experiment with these other signals to control a robot vehicle or to enhance this drone project. Obtaining the Blinking signals and making use of them seems much more complicated than the Attention and Meditation signals. 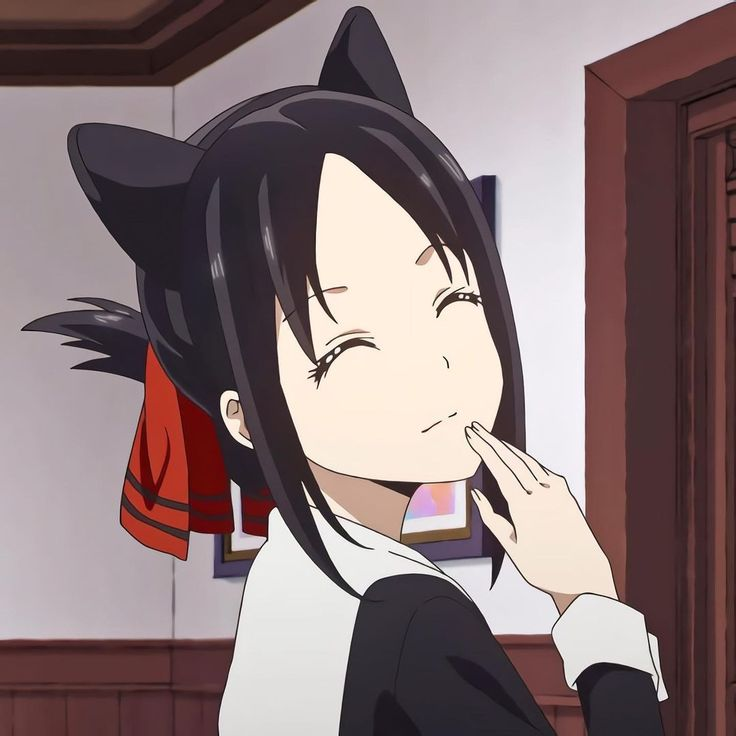 Brainwaves and Eye-blinks Drive a Truck