I wanted motorized glissandos on electric guitar stings, so the best solution was to hack already available self-tuning systems 😛

I wanted motorized glissandos on electric guitar stings, so the best solution was to hack already available self-tuning systems 😛

I've always wanted to automatically detune and retune the strings of a guitar while the guitarist was playing. In this project I tried, and managed, to do exactly that 😛 with the help of technician Johan Nördstrom. After completing the project I wrote some music for guitarist Ruben Mattia Santorsa.

Check the track on Spotify.

Also, check this video with Bertrand Chavarria-Aldrete improvising while the motors are modifying the tuning:

The first attempt was on a classical guitar. Johan and me tried to build a system with two linear motors that would move a second, mobile bridge up and down, in fact modifying the length of the strings. It didn't work as planned, since the noise of the motors was overwhelming, killing the feeble sound of the guitar.

Johan found out about the Tronicaltune system, a set of motorized tuning pegs for electric guitar that are meant to automatically tune the guitar at your command. The original Tronicaltune system is constituted by six machine heads and a shaft that is attached to the headstock, containing a circuit with a pickup for each string. While strumming, the circuit would compare the sensed pitch to the desired pitch, and adjust the tuning by controlling the motors accordingly. 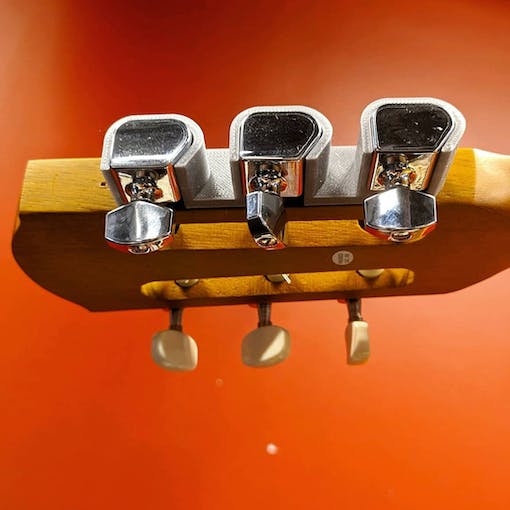 Mount of the pegs on the classical guitar, thanks to a 3D-printed holder 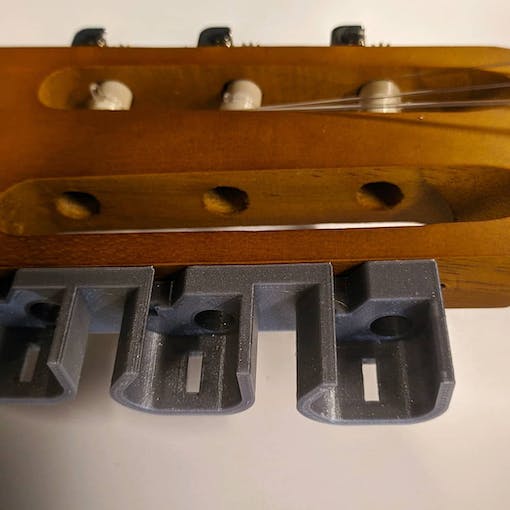 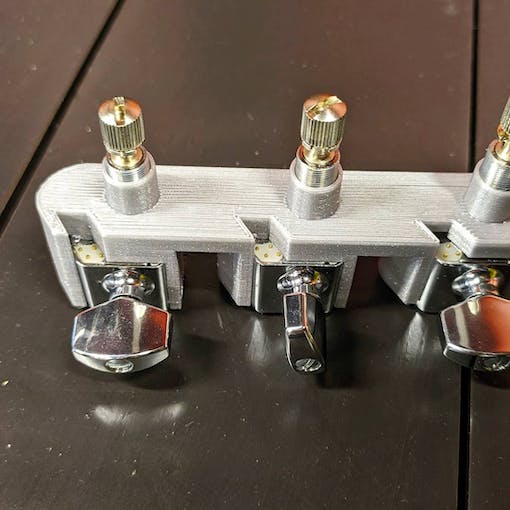 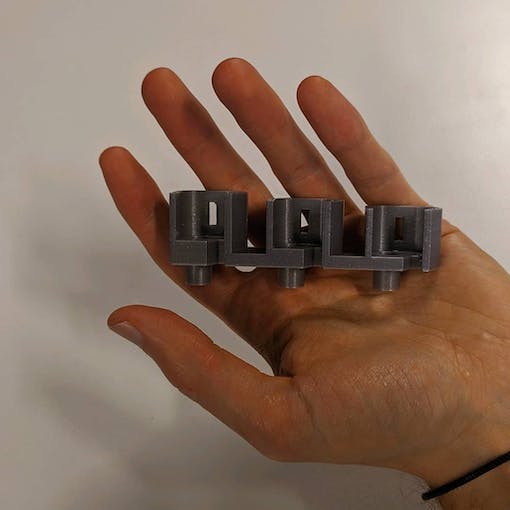 We found and bought a heavily discounted Tronicaltune set, and tried to insert its motorized pegs into the classical guitar, discarding the original circuit and hacking the machine heads. In order to hold the machine heads in place, I designed and 3D-printed a special piece which you might still find useful: you can download it from Thingiverse. Still, the wood of the guitar was amplifying the noise from the stepper motor big time!

The most delicate process was to open the Tronicaltune machine heads. After a test wiring, Johan got rid of the mechanical contact parts (including springs) and soldered very thin wires to the four terminals of each stepper motor. The four wires needed to be connected to the four outputs of each A4988 driver board. 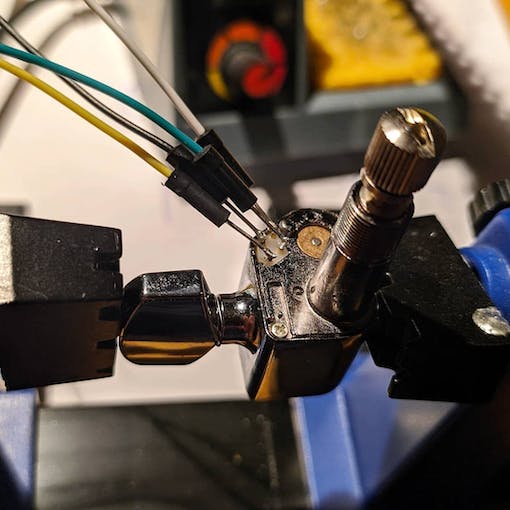 The easiest part was to connect the Arduino to the A4988s. See the schematic for checking how I decided to hook up the wires. We also made some tests and verified that the stepper motors were working at 12V. 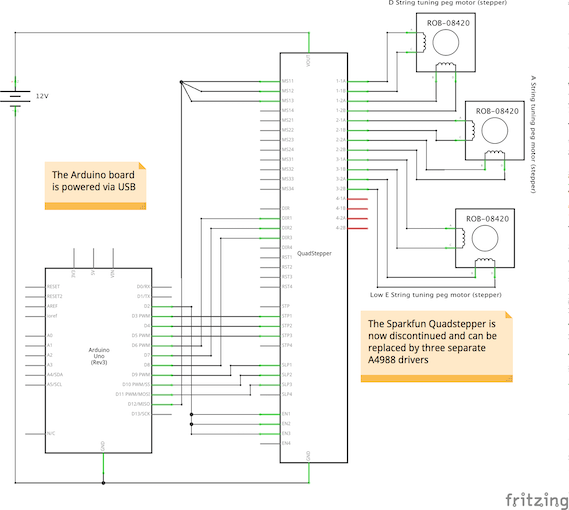 Mounting the motorized tuning pegs on the Fender didn't require the 3Dprinted holder, but needed some extra sorcery on the guitar. I actually used some Prusament cylinders from the previously 3Dprinted holder in order to safely rest the pegs in the peg holes of the guitar..

Video and some pics of the mounting process
Software

All the software I wrote was meant to make a DAW (I used Reaper), providing MIDI signal, able to control the motors in real time. Reaper was outputting MIDI notes to a Max MIDI port. Max was listening to that port and converting the MIDI notes to numbers, which were sent via Serial to the Arduino. Finally, the software in the micro-controller would convert these numbers into digitalWrite commands for the motors.

A piano-roll of the MIDI item shows us MIDI notes. I decided that any note equal or above pitch 64 (E4) would make a motor turn so that the corresponding string would tighten up (glissando upwards). Any note below 64 would make the string more loose (glissando downwards). 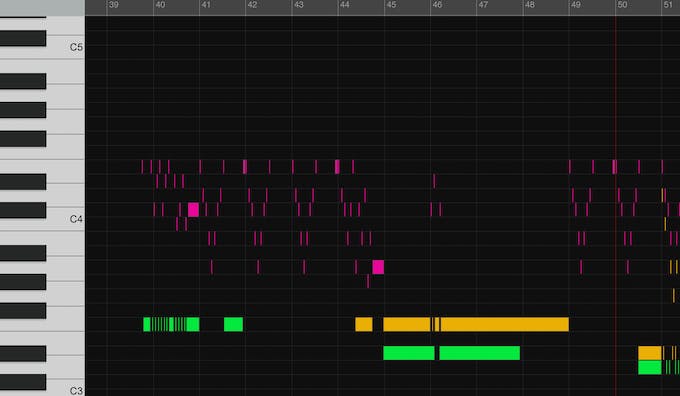 On top of this, there is a global control for motor speed, which I never used when I wrote the music for this special guitar, but still present in the software. This was sent as Controller 1 (any channel, 0 = incredibly slow; 127 = maximum speed).

Reaper was also playing back a scrolling video-score for the guitarist to read, so that the playing and the motor control would always be perfectly synced.

Max parsing MIDI events and sending them to the Arduino

The Max patch I wrote had the main function of parsing the MIDI events received from the DAW (but actually you could even connect a MIDI keyboard and control the motors live, for example, or use Max itself). Max was first routing MIDI note messages as per channel (8, 12, 16 for the guitar strings 4, 5 and 6). Then it was checking the pitch and velocity of the note event. MIDI pitch bigger/equal or smaller than 64 was critical to understand if the motor needed to move in one sense or another (direction), MIDI velocity was used to understand if the motor needed to move at all (velocity bigger than 0, which means "note on") or to stop (velocity = 0, or "note off"). Basically, Max was handling seven numbers, sent as bytes via serial to Arduino (with two bytes of value 255 and 250 before and after in order to be sure to distinguish the start and the end of the byte list (is it technically called array? 😨):

Another useful Max patch function is that of assisted tuning: by clicking the UP and DOWN buttons for each string, you can retune the guitar as you like, without the need of turning the pegs with your hands. A monitor section was showing the pitch currently played, for the performer to see if the string needed to be tuned up or down, as in a common tuner. 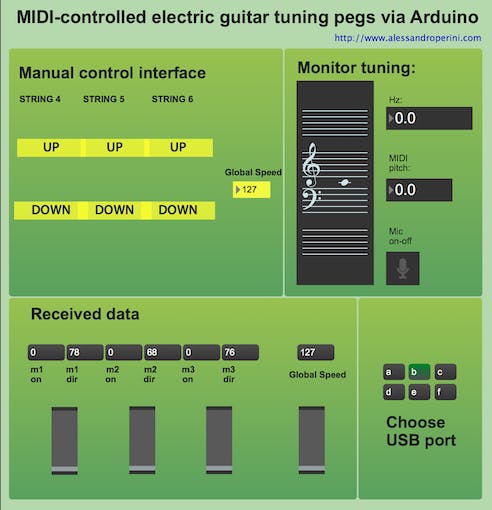 Copy and paste the following code in a new Max patch, and the patch will magically appear:

And finally, the Arduino sketch

The Arduino sketch (you find the whole sketch in the attachment section) is taking care of receiving the previously mentioned bytes and transform them into commands for the three motors. A serial connection is established

and bytes are received:

Then, bytes are parsed so that we end up with 7 numbers indicating the commands. Every time the 7 bytes are collected, they are shown in the serial window, just for debugging:

The raw commands are converted into motor commands sent to the respective pins.

This part above checks for each note velocity if it's equal to 0. If it is, the motor is stopped and the A4988 is put into sleep mode (very important for avoiding overheating!). If not, the motor is started.

The next part checks the pitch of the note events against the value 64, and decides the direction of rotation:

A further section examines the controller value and scales it to obtain the interval, in microseconds, between each step. And then uses that value as a pause between the steps:

If you look at the void loop() section, you can see that the actual operation routine is:

Which means: receive the bytes, write the commands to the motor pins (after having interpreted the bytes), step the desired motors, wait for an interval of microseconds calculated as scaleSpeed, put all three motors to sleep, show the values in the serial window, repeat the loop.

Part of a project where I controlled three motorized tuning pegs (electric guitar) via MIDI.

Holder for hacked Tronicaltune motorized pegs, to be mounted on a classical guitar

Download
The Tronicaltune system is a set of motorized tuning pegs for electric guitar that are meant to automatically tune the guitar at your command.
I have hacked the tuning pegs so that they can be controlled via MIDI. With this mount you can attach them to your classical guitar.

Schematics of the connections

Download
Connects the Arduino to the stepper drivers and to the motorized pegs. 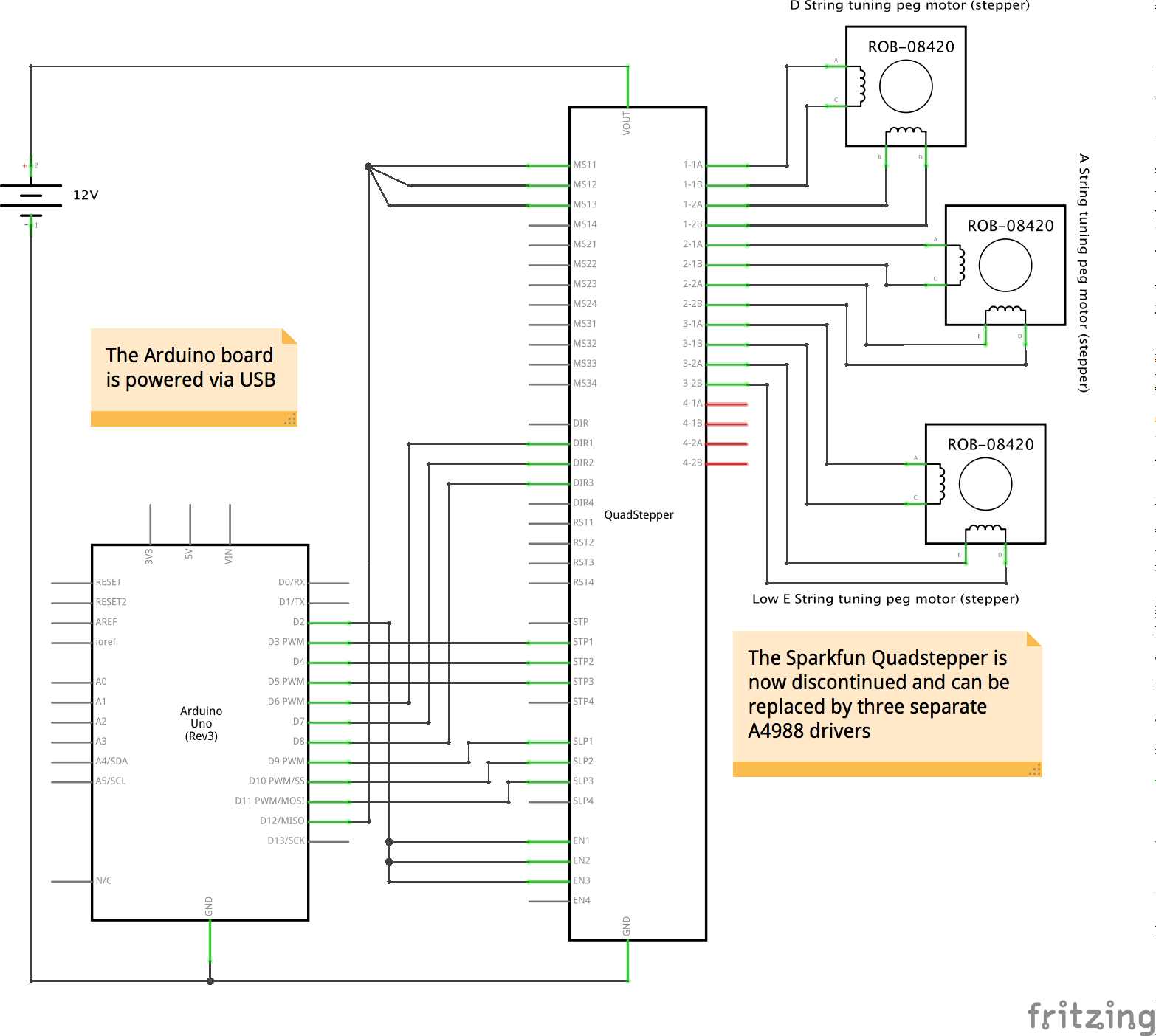 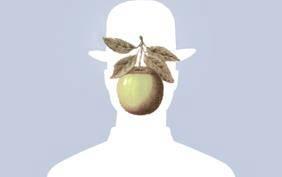 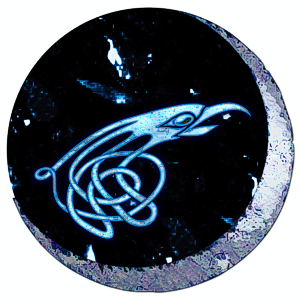 Turn your melodica into a compressed-air melodica controlled by Max and Arduino. It tries to follow the melodic contour it listens to!

Do you want to visualize the music volume on a led bar. We will make it easy as breathing specially when using the amazing 1Sheeld.