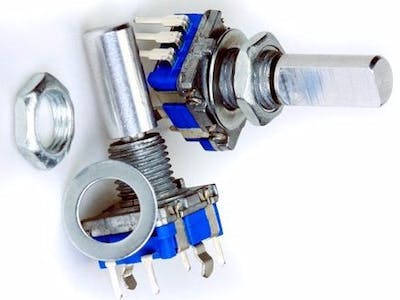 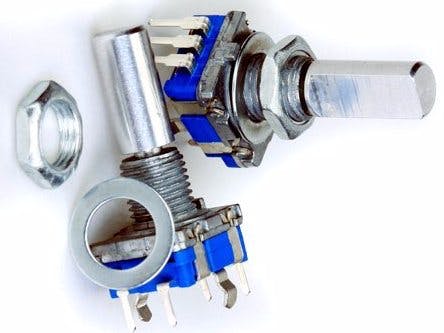 Standing on the shoulders of giants (i.e. learning from great inspirational people who have gone before you) allows us to create things in a fraction of the time compared to past generations.

I need to understand the ESP32, rotary Quadrature encoders and practise binary manipulation....

If you don't feel comfortable with binary, head over to this curriculum learning resource from SparkFun.

A couple of years ago I bought some push-button style spinning inputs (which are rotary quad encoders) for very cheap, but they require a micro-controller to understand the timing of two pulsing data lines (basically oppositely phased, or out of sync, signals indicating increase or decrease in a direction). I never got around to needing them enough, but now plan to use them in a heating system input device (think thermostat control).

To make my experience useful for everyone else I present the more interesting example of a treasure chest with a digital spinning padlock...

Build a fantastic treasure chest according to this guide, or locate a suitable storage box and drill a hole in the front for the rotating shaft of the switch (rotary quadrature encoder but 'switch' from here on). We can then easily stick the switch through from the back and then lock it in place with the included washer and nut.

I've stuck two on a piece of prototype board with headers attached. Using a purple (channel A), yellow (common) and green (channel B) jumper wire.

The first one on the protoboard (which we will use in this article) is nothing more than a rotary switch with headers, where as the second has additional filtering circuitry to de-bounce the signals, as is recommended for electro-mechanical switches. These additions are currently unnecessary, however with a more complicated, noisy circuit, interrupt-based, or faster spinning of the shaft they may become essential, if you're interested then look up the chip 74HC14.

To ensure the quad encoders work, I'm following a guide for arduino, sadly the guide I found was no longer available (404 error), so using the internet's library (archive.org) I looked at a past version of the page from 2014.

The setup is quick, only 3 wires plus the usb cable and including software I was done in less than 5minutes. Now it's your turn!

Looking from above on the 3 pin side, assuming it's in a breadboard, using the datasheet (an identical products datasheet) we can see that the first pin is channel A, then common (think ground), then B.

Our example guide says pin AnalogInput Zero is best for A and AnalogInput 1 for B, but it also mentions using Analog 8 + 9 without code change. It's using the loop to read the hardware registers and access the pin values instead of being interrupt based which is required and really matters for timing critical applications

I am using a cheap arduino nano (revision3) clone, which has usb to serial so I just plug it in and upload the code, then starting serial monitor it instantly works with changing values scrolling correctly.

I modified the code to ensure the correct pin numbers, removing the 2 top lines defining the pins as 14 and 15, and manually replacing them with A0 and A1 which are predefined for each board and therefore correct for the nano.

Included below is the actual code I used:

For some that will be enough, the counter variable contains a number that spins from 0 to 255 and from that it would be trivial to add code to trigger an output pin attached to a solenoid based on a series of predefined values (like a safe combination would).

If I was to do this I would probably implement a buffer of 4 numbers, and lets say on each change of direction, push the number into the buffer, and test the result. You could also require the user to pass 0 before each subsequent number is stored like a safe does.

Alternatively, instead of on change of direction, it could use the other 2 pins of the rotary switch which are the push button pins, bridging when the shaft is depressed (pushed in), at which point storing the counter value.

Now the challenging part for me, replacing the arduino Nano with the ESP32. A dirt cheap wifi/bluetooth micro-controller, which at this time is still having drivers written to bring full support to the arduino IDE (integrated development environment), but it progresses every day! Mine is a sparkfun ESP32 thing (has onboard lipo charger), but any ESP32 dev board will work.

All I need is a simple pair of interrupts and a serial output, but the common issue I seem to run into is a limited selection of pins available for use as serial or interrupts, and the use of hardware registers (fixed addressed locations in memory usually for controlling pins) like the first line and last few lines of the previous example.

The ESP32 complicates matters more by allowing the pins to be assigned dynamically, meaning not necessarily consistently. There are fortunately some predefined rules, like serial (UART) support only being on certain pins, and again interrupts have their own rules as well as there being multiple types.

I'll crack into that over the weekend after refreshing my mind on the documentation of the hardware registers and interrupts...

Having spoken to Kolban on IRC in the #esp32 channel I got a pointer in the right direction to get access to the pin registers. The function gpio_input_get() returns the first 32pins, and there is a _high() version for the later pins (above 32).

Having modified my code accordingly it wouldn't compile until I found and included the header file for esp32 gpio function. (grep to the rescue )

'So the esp32 code follows and compiles.

Just got to actually test it now, but I've got distracted looking at LCD screen datasheets, as I have an old JDH162A (2line 16pin) that I equally should have hooked up at least once by now..

Having tested it there were unexpected results.

Having added delays and separated each element of the method, passing each term to serial.println, I couldn't change the result and being none the wiser I sat there thinking about pull-down resisters for a while. Eventually I realised I needed pull up resisters or to enable the internal ones because the "switch" is connecting common(ground) to pin_A and pin_B which must therefore be pulled high.

[ It turns out I'd overlooked that the code I initially used on the arduino utilised the old technique to set pullups, which is to write 1 (high logic level) to the pin (causing pullup resister to pullup the pin to 5v) after setting the pin to input mode which initially by default pulls the pin down to logic level 0 (0volts). After a certain arduino ide version the INPUT_PULLUP functionality was implemented. ]

Changing the pinmode definition fixed everything.

There is still a timing issue when scrolling the knob but occasionally intermittent at most, possibly all my delays and serial prints affect things, and so I'll next be trying the de-bouncing circuitry, and switching the code to use interrupts.

Everyone's favourite reason to look at oscilloscopes and visualise what happens to the pin of the microcontroller...because switches are more like springs, One press results in on-off-on-off-on...

I ended up using the schmitt trigger to debounce the circuit and you can see my initial version on the same protoboard in the photos. It worked, what more can I say. There are a vast number of youtube videos and resources I've watched on or around the subject, but really you should read the recent hackaday article on the humble schmitt trigger which covers enough for most needs.

This has been good fun as far as exploring docs, lateral thinking and finally achieving what we set out to.

Copy and paste, adjust pin numbers, using pins under 32, or adjust function to be gpio_input_get_high() if you wish to use the top 32 gpio register. -- NEEDS PULL UP RESISTORS OR pinmode(INPUT_PULLUP)

3d Print this after adjusting to accommodate your switches shaft, or use a pre-built knob.
CAD file on thingiverse.com

Connect Stepper Motor to Arduino and control it with Rotary Encoder - Quick and Easy!

The device will keep you safe. Just have to click a button and your precise location will be shared.

Safe City: A Device to Keep You Safe

Using the built-in Arduino EEPROM to save and restore values - Quick and Easy.

Connect Rotary Encoder to Arduino, and program it - quick and easy!