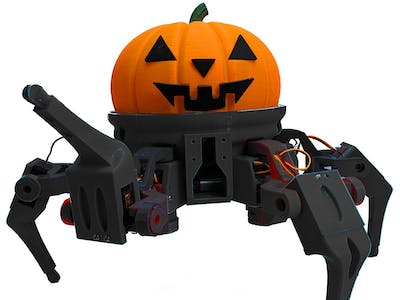 A super-sized version of our popular "Vorpal the Hexapod" project. Twice the size and ten times the fun! Scratch enabled for education. 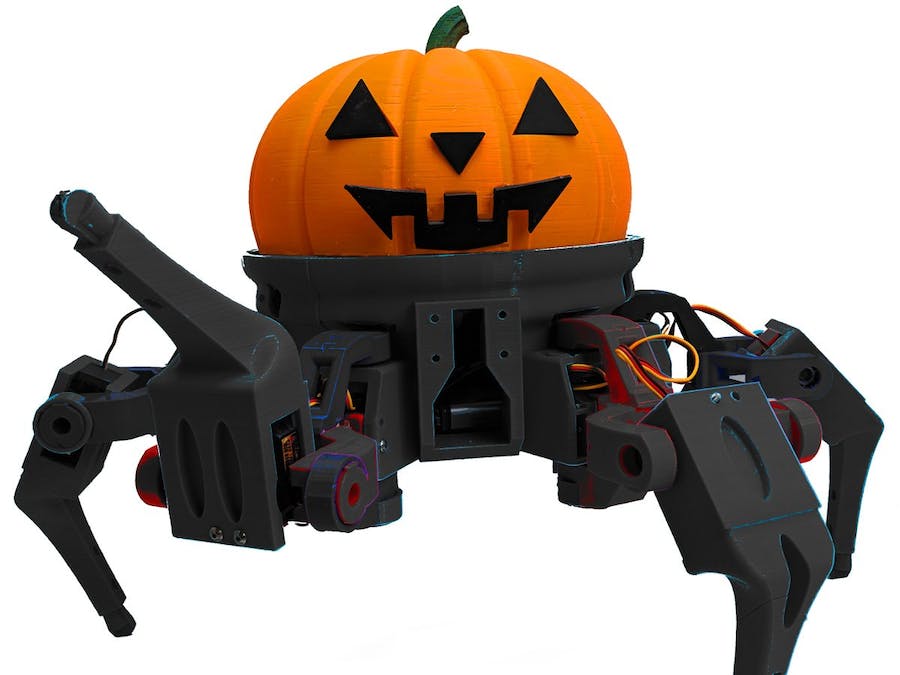 A super-sized version of our popular "Vorpal the Hexapod" project. Twice the size and ten times the fun! Scratch enabled for education.

We launched our original Vorpal the Hexapod open source, 3D-printed robot project almost exactly a year ago and it was a huge success. Over 1, 000 people worldwide have built that project so far, including hundreds built by schools worldwide. (Here's a link to the smaller hexapod project.)

But we wanted to go bigger, and that's why we designed Max the Megapod. Max is head-turning big. Nearly two feet in diameter when standing, three when sitting sprawled out on the floor.

When we showed Max at the New York Maker Faire a few weeks ago, the crowds loved it! Little kids (and even their parents) were awe-struck whenever Max sprung to life in our display and started busting some serious dance moves. People audibly gasped when it started dancing and scampering at terrifying speed across the table.

Some editors from MAKE: saw the reaction and awarded us a coveted "Editor's Choice Award" at the Faire.

We Believe in Open Source

Like all our projects, Max is open source, CC-BY-SA. All 3D models and source models are publicly available for your hacking pleasure. All Arduino and Scratch code is public as well. We use absolutely no proprietary parts. Every piece of electronics is either open source (Arduino Nano, Adafruit Servo Driver) or commonly available (standard size servos, standard connectors, no proprietary boards of any kind). Links to all source files are listed below.

We do provide the convenience of kits (Megapod kit is here) that come with everything you need. We've found that if we provide kits, many more people will build the project, and they'll be much more successful. A lot of people try to source their own parts but end up buying the wrong parts, or are fooled into buying defective parts from unscrupulous suppliers.

If you're thinking of building your own Megapod but have never built a moderately complex robotics project before, we would suggest you first start with the smaller, less expensive, and easier to build original Vorpal the Hexapod (link) model.

Thanks to Gaige Moore who helped develop the original prototypes for the smaller Vorpal the Hexapod on which Max was based, and for helping build and test Max during development.

Thanks to science fiction author Peter S. Drang for originally suggesting a supersized version of the hexapod.

Scaling Up Is Hard To Do

Max is based on the original Vorpal Hexapod, but trust me, it was a lot harder than just printing the parts at 200% size!

Hundreds of changes had to be made to the 3D models to make this work and still be printable on modest sized printers. (Printer only needs a 200mm cube bed, about 8 inches, medium sized by today's standards).

The main changes were:

In all, it was at least 300 hours of work (not including print time for numerous failed attempts), and thousands of dollars in expenses, to create this double sized version.

Interestingly, one thing that did not change very much was the software. No changes were required to the Scratch interface, and no coding changes to the Arduino code were needed (out of thousands of lines). This allows us to keep a common codebase between the large and small robot.

Fully Compatible with Vorpal the Hexapod

Max is fully compatible with all the features of the original Vorpal Hexapod, including:

Originally we started designing this just as something we'd use to bring crowds to our booth at Maker Faires, teacher conferences, and other public demos. But people kept asking if they could build one themselves, so we did the extra work to make it into an easy to build kit.

Right now, people from all over the world have bought our Max the Megapod kits, and at least two Makers we know of are building the project from self-sourced parts. Soon there will be Megapods running around all over planet Earth, right alongside their little sibling Vorpal Hexapods.

Are we working on an even bigger version for next year's NY Maker Faire? Could there be a Gigapod coming next?

The problems of doubling again to the next size (almost four feet in diameter when standing and weighing an estimated 50 pounds) are even harder to solve, and will cost at least an estimated ten thousand dollars in development expenses to perfect.

Are we crazy enough to try? Will my wife allow me to drop $10k building what amounts to an awesomely huge toy?

This is the same code as used on our smaller hexapod project.
https://github.com/vorpalrobotics/VorpalHexapod

Here are all the STL files for the Megapod. The source models are on OnShape.com
CAD file on thingiverse.com

Download
This is the 6.0 volt side of the power harness, it distributes power to the Servos. A single DPST switch controls both sides of the electrical system.

Download
This is the 9v side of the power distro harness. It takes power from a 9v battery
and sends it through a BEC which converts to 5.0 volts to feed all logic components (Nano, Servo Driver, Bluetooth module, etc)

Download
This diagram shows the connections on the Arduino Nano to other Megapod electronics. 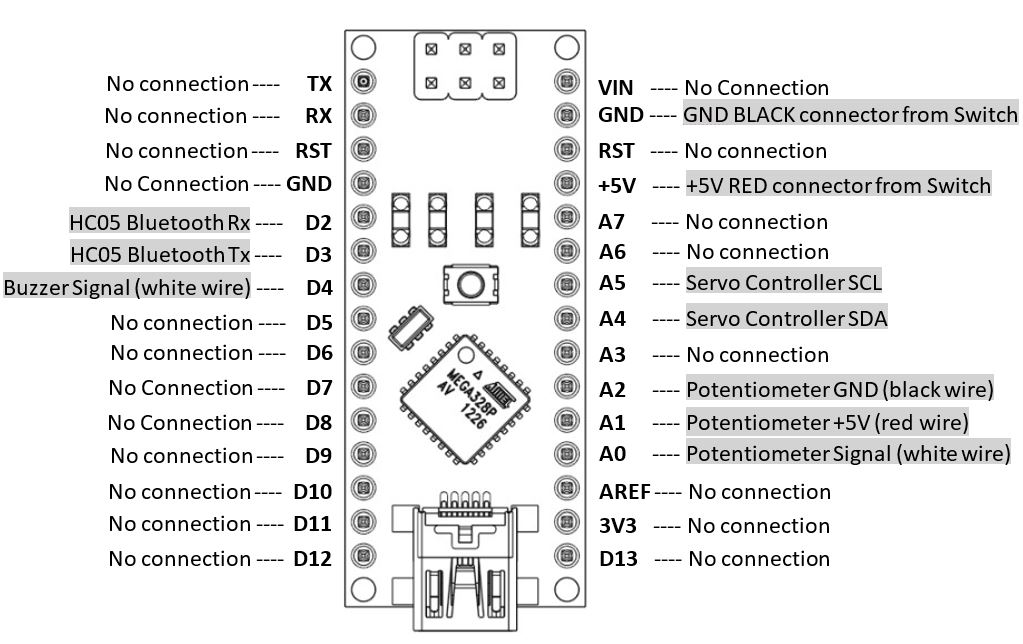 Get a grip! This grip arm allows Vorpal the Hexapod to grab items in a claw that opens and closes, the arm also raises and lowers.

Meet Walbi, a 2:1 scale humanoid with Arduino programs for motion capture and playback. Move it by hand, record and then play it back.

Build an Arduino heart rate monitor with a MAX30102 sensor and a 16x2 LCD.