An awesome open source, 3D-printed vase stand with addressable RGB LEDs that fade between selectable colors to light up your life.

Vase Dazzler (Great for Lithophanes Too)

An awesome open source, 3D-printed vase stand with addressable RGB LEDs that fade between selectable colors to light up your life.

This is a 3D printed vase (with optional 3d printed rose) that is lighted with addressable RGB LEDs. It can glow different colors and fade between colors. There are ten different color effects you can select using a pushbutton, and it also has a dial to change the brightness. It can be powered by a 9v battery, or can be plugged in to a USB cord and powered by a wall charger or computer USB port.

Step 1: Get the Parts and Tools You'll Need

Convenient kits that include all of the above parts, with all soldering completed for you, are available from the Vorpal Robotics Store. This project is open source, however, so feel free to source your own parts.

The 3D print files are all easy to print and will work on printers with beds as small as 5 inches cube.

The 3D print files (STL) for the Vase Dazzler is hosted on Dropbox here:

There are three parts: Base, Top, and Drawer (see the photo). These print without supports and generally do not need brims or rafts either. You should print these in the same material that you're going to print the vase, because that way it will just blend in to the vase. I suggest clear PETG as a great choice because the vase will be translucent and show the colors from the LEDs very nicely.

The 3D print files (STL) for the vase, rose, and stem are also hosted on Dropbox:

(Note that there are many other flower and vase designs that would work great with this project, you can check out websites like Thingiverse.com for more designs.)

The vase should be the same color as the Vase Dazzler, I suggest clear PETG. Vases come out better if you print them using the "spiralize" option if your slicer has it.

Normally, vases are printed with no top and zero infill. I would also suggest printing with no bottom. In other words, your vase will just be a shell of material with no top, no bottom, and no infill. That will let the LED light really get inside and light the vase up. If you have retention problems, try printing with just 1 bottom layer.

The stem should be printed in a dark green filament. It could be PLA, ABS, or even green PETG.

There are three parts: Stem & Bud Leaves, Stem Extension, and Rose_open. You probably don't need the extra leaf for this particular project. But do print the other two parts. The stem will come out better if you print one piece at a time (you'll avoid stringing that would likely occur if the print head had to bob back and forth between two tall objects).

Note: You can skip this step if you purchased the electronics kit from the Vorpal Robotics Store because the kit provides pre-soldered parts.

A few parts of the electrical system need to be soldered together, this is described in the following few sections.

Solder the red, black, and white female Dupont jumpers to the potentiometer as shown in the diagram. Insulate solder joints with electrical tape or shrink tube.

Solder two female Dupont jumpers (about 15cm long is good) to the terminals of the pushbutton and use electrical tape or shrink tube to insulate the connections.

Solder red, black, and white Dupont connectors to the LED ring as shown in the images. You should strip the wires and trim the ends to about 1/8 inch (3mm). Tinning the wires will help make the connection to the pad more easily, as will use of solder flux.

If desired, after the solder cools you could put a drop of hot glue over the connections to provide a little bit of stress relief on the joints. Shrink tube or electrical tape can also be used to reinforce the wires near the pads so no single wire gets tugged out.

Step 4: ​Flash the Arduino Nano With the Control Program

The control program for the Vase Dazzler project is hosted on github here:

Download the INO file and use the Arduino IDE to flash the Nano. (Note: this tutorial assumes you understand how to upload programs to an Arduino. If not, there are many tutorials on the web, YouTube tutorials, etc.)

Insert the Potentiometer in the Base

Remove the nut and cap from the potentiometer. Insert the potentiometer into the hole as shown, and secure with the provided nut. Turn the knob fully counter-clockwise, then push the cap on such that it points down.

Insert the Pushbutton in the Base

Remove the nut from the pushbutton. You won't need it, friction alone will hold the pushbutton in. Insert the wires through the hole, then gently press the pushbutton into place. Do not push on the button itself when doing this, push on the black rim. If you push too hard on the pushbutton you may break it, hey it's only plastic. If you find it is too difficult to insert, the 3D printed hole might be a little too filled in. Use a file or sandpaper to take a bit of material off.

Insert the LED Ring in the Top

Thread the LED Ring's wires through the rectangular hole in the top as shown. There are three tiny nubs in the indented area in the top, place the edge of the LED Ring under two of them, then angle it in and snap into place.

Make electrical connections to the Nano as shown in the diagram.

The Nano is inserted next. Its USB port faces into a hole that allows access after assembly (and can be used to power the project via USB). Almost all of the connections will be facing up, just one ground wire will be on the bottom. Angle it in, making sure the ground wire on the bottom clears the potentiometer wires, and aiming the USB port to the hole. It will snap into place between tiny brackets on the floor of the base. You may have to wiggle it around a little bit but it will go in.

Bring the wires through the cutout rectangle at the top of the base, and push it in from the front. You should hear it click into place.

Now route the wires so they won't be in the way of the top closing. The pushbutton wires go all the way around the battery compartment. Tuck other wires out the way so they don't get caught between the base and top. Place the top on the base (it will only fit one way) and insert the center screw to secure it.

Connect a 9v battery then slide the battery drawer into place to secure it.

(NOTE: You can also power this project using a USB A to mini cord. Plug it into the Arduino Nano USB port on the back of the Vase Dazzler, then plug the other end into a mobile phone charger or computer to provide power. In this mode, the on/off switch will not do anything however since the USB in effect is bypassing the switch.)

Give it a test by turning on the power switch! It should light up after a short boot sequence. The dial should change the brightness, the pushbutton changes the color pattern.

Step 7: ​Assemble the Flower and Vase

Take the Stem & Bud Leaves part. You will notice that the leaves come off at an unnatural 90 degree angle. A simple post processing step will make them look realistic. Hold the part so the leaves are facing down, and you are holding by the very end of the stem, far away from the leaves. Have a bowl of water nearby. Take a butane lighter and hold it under the leaves. Keep it moving, don't let them burn or char! After a very short time (less than minute) they will start to sag under their own weight. Turn off the lighter and set it aside, take the rose bud and push it up under the leaves (be careful, they may be hot enough to burn you). The will take the shape of the flower.

Wait a minute and the leaves will cool and stiffen again. Now use a drop of super glue to affix the rose to the stem permanently.

Put a drop of super glue in the hole of the stem extender, then press the main stem into it to complete the flower.

Step 8: ​Learn the Controls and Bask in the Awesomeness

Place the vase and flowers on top of the Vase Dazzler. If desired, you could use a few drops of super glue to permanently affix the vase to the top of the dazzler, or you could use a glue that can be removed like rubber cement in case you want to try other vase designs later.

Turn the on/off switch to the ON position (marked "1" on our kit switch).

After a one second boot delay, the LEDs will light up.

Set your project on a table or shelf and enjoy the beautiful colors! Better yet, give it to your Valentine and feel the love.

You can substitute any reasonably sized vase and of course you could multiply the number of flowers. Several alternative vases and flowers are in the folder with the STL files referenced earlier in this article.

A number of people have told me that this project is also great for lighting up spherical or cylinder-shaped lithophanes. How about making a moon litho glow? 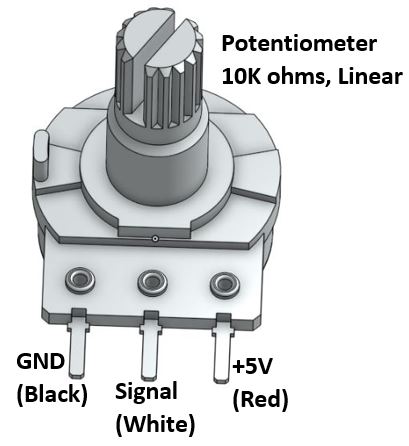 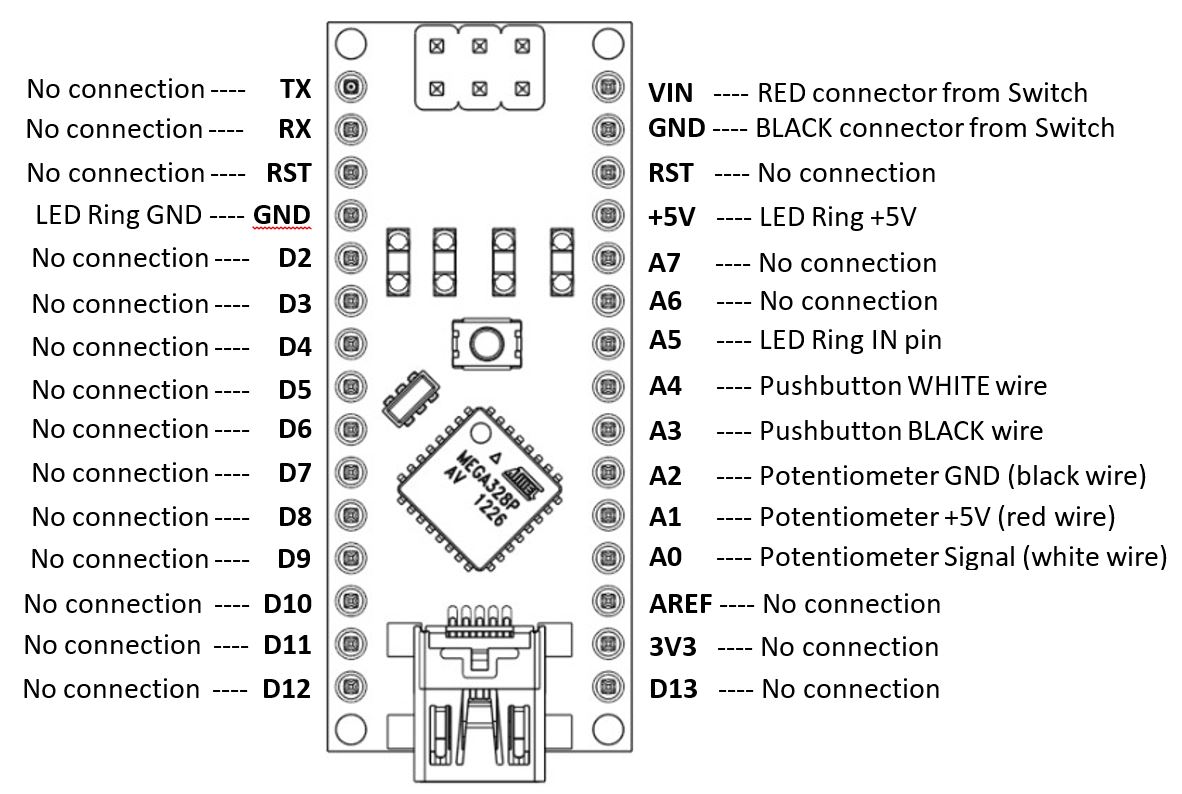 Build a simple NeoPixel matrix with these simple steps!

How to Make a NeoPixel Matrix