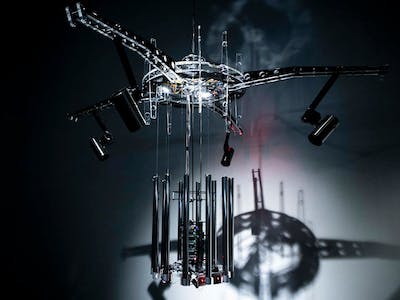 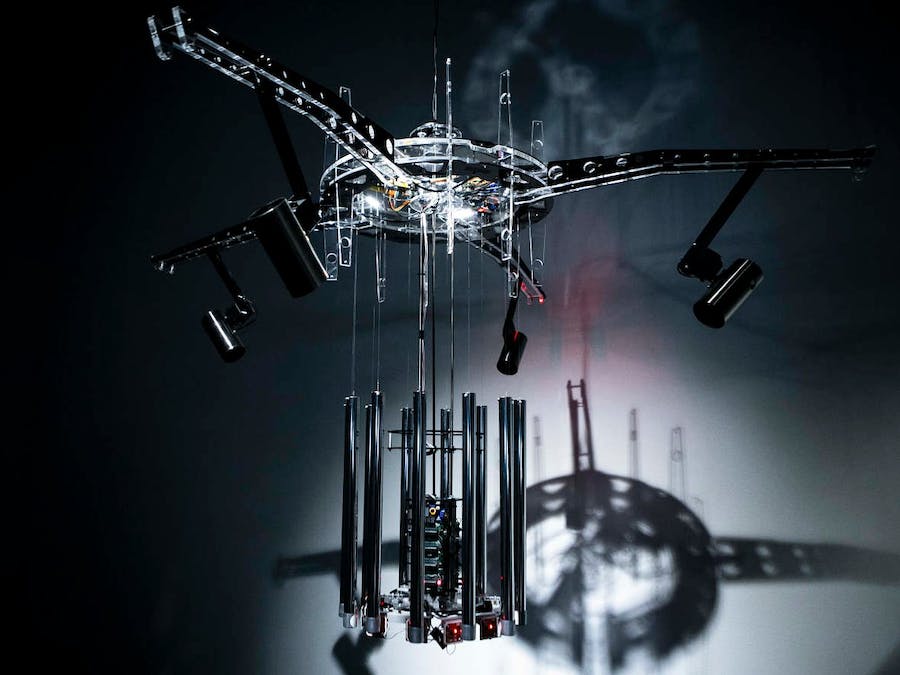 The installation includes a composite system of several autonomously algorithm-driven elements. The basis for this work is a Wind Chime — an oriental decorative talisman that produces a ringing sound from the slightest air movement and makes the wind audible. Traditionally, the melody of wind is created by an occasional random wind blow. In the installation, however, there is a complex system of self-learning cybernetic processes that produce sound.

The installation consists of three main elements. The first kinetic object is designed like a wind chime, but its traditional tubes or bells are replaced with RFID tags and a radio tag reader. RFID is  an acronym for “radio-frequency identification” and refers to a technology by which digital data encoded in RFID tags or smart labels are captured by a reader via radio waves (for example, in public transport tickets). There are several fans around this element that create a turbulent air flow simulating the wind. The second kinetic object consists of 6 small transparent sliding doors and a screen showing 6 virtual doors. They look like those doors that are opened with RFID tags. They are activated when a tag touches a reader in the main object, wind chime. The third part is an output system. It is composed of a thermal printer (usually used for checks) and a loudspeaker that makes sounds upon every contact of RFID tags with readers in the wind chime.

All the elements in the installation: wind, wind chime, automatic doors, sound, and printer — are connected by a single algorithm-driven system. Its main task is to distinguish and track sequences and repetitions in the way the wind moves the RFID tags which control the entire system — sound and doors. As soon as the algorithm recognizes some established patterns, it changes the functional pattern of the installation by manipulating the air flow.

Ultimately, all the results are presented on a printed statistics sheet that creates some sort of chronicle of the system. The closed-loop system constantly experiments with random numbers, and thus it develops and evolves like a digital organism. By working with transitory and “lightweight” processes, the object creates an image of an extremely fragile and balancing system that manipulates air, emptiness, and sounds. All together this creates an infinite variation of meanings, striving to slip through constantly opening and closing doors.

A low-cost off-road 6WD autonomous robot using Arduino! This self driving car drove for over 2 miles on a bike trail on its own!

Conceptualised a portable eBook reader which allows the blind to feel the Braille characters with a blind stick which can detect obstacles.

This is a low cost robot that will help students in better learning and understanding.

Now we can check out the depth of the sea level by using a pressure sensor (MS5803–01 BA) connected to an Arduino, and display sensor data.

Create a Diving Computer with an MS5803–01BA Pressure Sensor