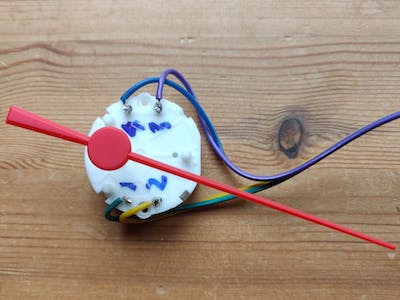 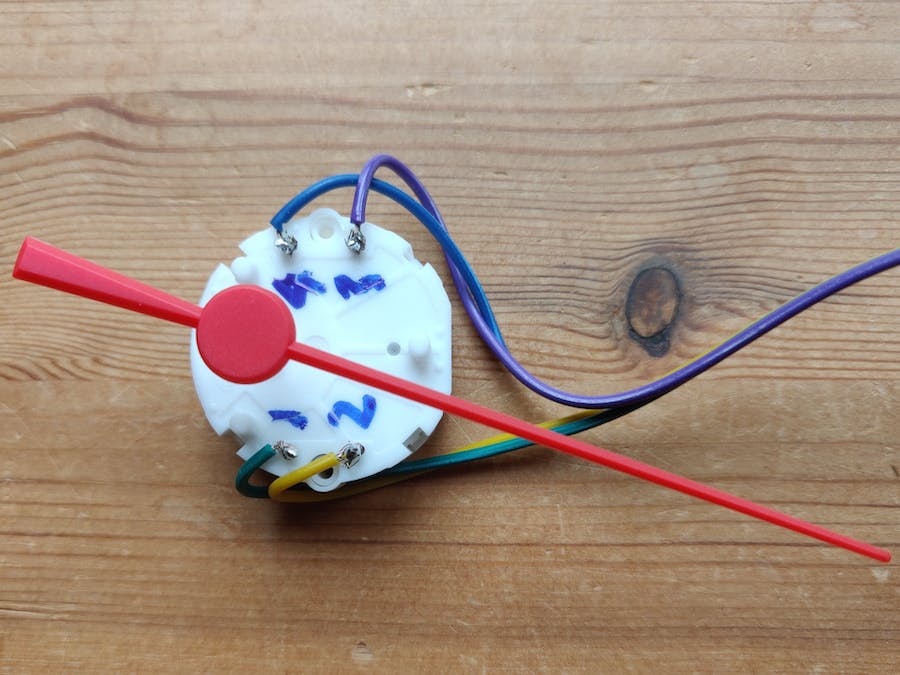 Switec X25/X27 stepper motors are designed for use in automotive gauges. In this project I will show you how to program an Arduino Uno to control one of these stepper motors using the XOD visual programming language.

The X27-589 is a bipolar stepper motor with an angle of rotation of 315 degrees and a step count of 945. The four pins are on the front of the device and they are numbered counter-clockwise, starting from one at the top-left.

In this project the stepper motor is driven using a L293D quadruple half-H driver. For a comprehensive introduction to the L293D, see this tutorial from the Technology Robotix Society. The pins of the L293D are connected to the Arduino Uno and X27-293 as follows:

A proto-shield with a breadboard is placed on top of the Arduino Uno and the L293D is mounted on the breadboard.

A slide potentiometer breakout board is connected to analog pin A0 on the Arduino Uno, so that we can demonstrate the gauge responding to user input.

Guy Carpenter wrote an excellent Arduino library for the Switec X25.168 stepper motor (and compatible steppers from other manufacturers): https://github.com/clearwater/SwitecX25. I've wrapped his code into a XOD library (https://xod.io/libs/wayland/x27-589-gauge/) for the X27-589 gauge.

To install the library in the XOD IDE, hit “File → Add Library” and enter the full library name:

Following installation in the IDE workspace, the library will be visible in the project browser. To find out the function of a node, select the node and hit H to invoke help:

These examples demonstrate the two different modes by which the gauge can be updated and are described in detail below.

The example-blocking patch (above) demonstrates blocking updates of the gauge. On start-up the gauge will be set to zero. The needle of the gauge will then cycle through the following positions: middle (472 steps), maximum (945 steps), minimum (0 steps). The needle will pause for 2 seconds at each position. The update-blocking node moves the motor smoothly to the position specified by the set-position node. Please note that the Arduino cannot do anything else until the motor has reached its target position. The video below shows example-blocking patch in action:

Running the example-blocking patch from the XOD library.

The example-non-blocking patch (above) demonstrates asynchronous/non-blocking updates. On start-up the gauge will be set to zero. The needle of the gauge can then be controlled using a potentiometer (analog-read node). The map node translates the output of the analog-read node (which has a range of zero to one) to a step position for the motor.

Each time the update node receives a pulse to its UPD input it advances the motor at most just one step toward the target position specified by the set-position node. A pulse should be sent to the UPD input of the update node as often as possible. The advantage of the update node over the update-blocking node is that it enables you to control many gauges simultaneously, and you won't have long periods of inactivity (and potentially missed I/O events) while a motor is moving. The video below shows the example-non-blocking patch in action:

Running the example-non-blocking patch from the XOD library

This project shows how to monitor Arduino using a web-based gauge.

Read data from an absolute orientation sensor without writing any code!

An XOD Library for the BNO055 Absolute Orientation Sensor

Learn how to build a digital weight scale and force gauge with HX711 load cell module and Arduino.