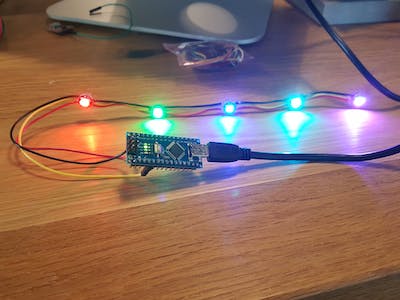 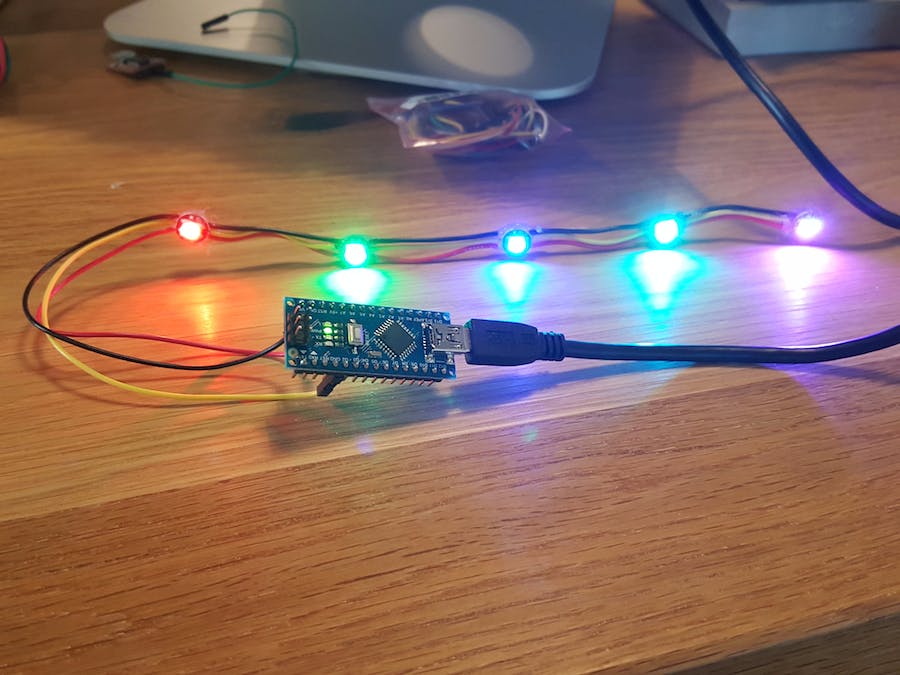 Welcome to the first hardware hack night! Tonight's free hardware giveaway consists of a strand of 5 WS2812 addressable RGB LEDs and an Arduino Nano clone for controlling the lights. Listed below is basic information on setting up the hardware and a simple project that gives you the ability to control the color of each individual pixel using the serial port. Remember, this is just start - there's plenty of loaner hardware available so you can make some awesome creations. Some ideas:

To keep costs down, I used an Arduino Nano clone. Since the cost of an FTDI usb-serial chip is pretty high compared to the other components, these boards use a CH340G usb-serial chip. Unfortunately, most operating systems don't come with the driver preinstalled so you'll have to manually install it.

Our LEDs are WS2812 individually addressable RGB Light Emitting Diodes. They have three connections, power, ground, and signal. The signal to control the LEDs is very timing dependent - but no worries, a library has already been written so we can start blinking some lights right away. To install the library, first select the "Manage Libraries" option from the Sketch > Include Library dropdown.

Then, search for the Adafruit NeoPixel library and install it!

This library is really terrific for controlling the LEDs. The Fast LED library is another library that we could use to control our pixels and it's installed in a similar fashion as the Adafruit NeoPixel library.

This is super simple. Make sure the Arduino clone is unplugged. First, plug the power and ground from the strip (red is power, black is ground) into the pins marked +5V and GND respectively.

Then, plug the signal wire (yellow) onto the pin labeled D2. You can use any of the output pins, but you'll have to modify the code to match the pin number.

That's it!. Once you plug in your USB cable, a pre-built demo showing off the pixels should start. Look at those blinky LEDs!

Attached below is a simple sketch that allows you to manually set the color of each pixel individually using the serial port. It's simple enough, but we'll do a basic walkthrough here...

In this first bit, we include the NeoPixel library, and define the location and number of leds on our strip. Change the value for PIN if you're not using D2 for the led signal. Next, we create an integer to keep track of the number of integers we receive over the serial port and an array to store these values. Finally, we create an instance of a NeoPixel strip, using the values we setup earlier.

The setup() function is pretty simple, we setup the pixel strip and clear it out by calling strip.show() with no values being set. Then, we start the Serial port at 115,200 bps.

The Rural Hack Kit is the perfect electronic set to get started hacking farms, gardens, or even plants on your balcony.

Part One in a series of JavaScript and Hardware. In this part, Iain shows how to get Node and Yarn set up and making our first Nodebot.

JavaScript with Hardware [Part One]: Making a Simple Nodebot

A stylish night light that will decorate your desks. We called it "LIGHTHOUSE UNDER THE SEA."