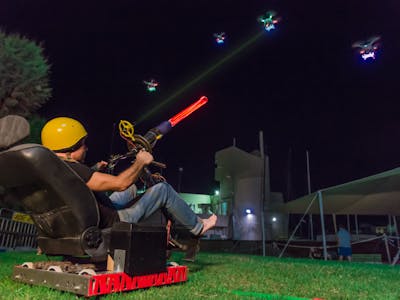 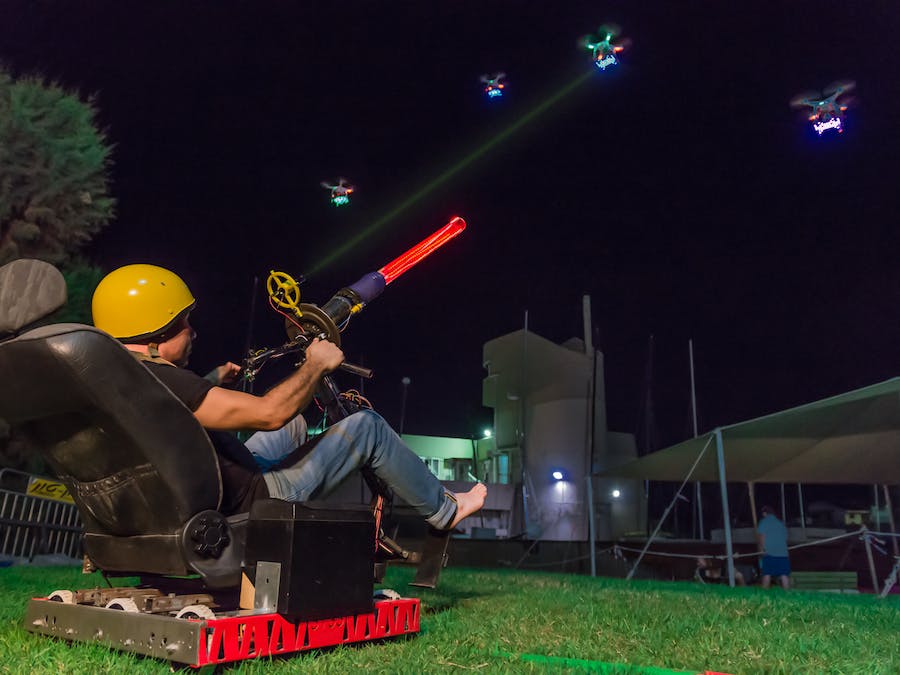 This is a project we did in a the GeekCon 2016 hackathon, 2 weekends ago, which was both great fun and, I hope, contains some technical details you may find interesting...

We've created a physical version of the immortal Space Invaders game, using a bunch of drones flying in formation with led matrices and light sensors on them, as a motorized car seat gushing over a 20-25 meters rail, tries to take them down using an almost-real laser cannon. When hit, the drones communicate back to the ground station, informing the game server, that takes them down autonomously, once their health is out.

It was an enormous effort to pull this off, and it took a team of 13 people (quite unlikely for Geekcon, luckily we got a special pass) - each doing something completely different. We had Ronen, the metalworking man, who created the chair and the cannon and morphed it into a awesome Mad Max look and feel. Then there was the robotics team led by Rotem, a group of high school students that are FLL enthusiasts who took excellent care of the heavy lifting required to make a cart that conveniently carries a person in high velocity (those transistors took a beat!). Then came the rails in Avi's car and pretty much owe their existence to his drive, as well as a generous contribution from his friend who, conveniently, owns a metal working factory and had found the time to sit with us, dream and plan. Ofer, Saron and me, at our the studio, have been manufacturing custom, laser cut led matrices made of strips embedded with light sensors, while Elad, Yiftach, Tomer, Ran, Uri and Yariv were up to their sleeves coding the drones-to-earth communication protocols and the game server logic. We also got 5 drones from our sponsor, Google.

Technically, we had 8 Arduino one on each drone, controlling the led matrices and the reading sensors, that were reporting back to land over radio connection, where a master Arduino dispatched the radio messages to and from the game server, coded in processing. Also, 8 remote controls paired to the DJI drones were connected to an 8 androids running our app, that reported back to the game server over Wifi all that was needed to drive the drones, a task that turned out hard to master then you'd think.

Eventually, at about 3:00AM we managed to pull it off, and it actually worked!

7 minutes later, we've air-crashed 2 drones and called it a night (it was about 4am) -

That is why the footage from the actual game is not so great but we plan on re taking it in a nearby, deserted soccer field pretty soon.

During the time when the project was open to visitors, the auto pilot mode was disabled, and that gave us the opportunity to try the game with various number of drones, that were all manually controlled - and it was a blast, too! That gave us the idea to do a technical writeup, so that other people can make and enjoy this one on one to one on eight game. Given, without the laser cannon it just isn't the same but a DIY laser gun is just as nice for taking down drone invaders :)

Here are some of the pics from the build and event:

here is a making of video:

and here is the project's Geekcon closing presentation video:

Download
The schema for the Airborne arduino that is reponsible for the led matrix, light sensors and rf communication
airborne_arduino.fzz 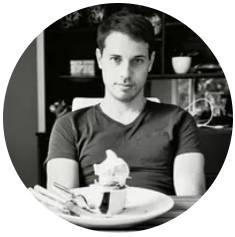 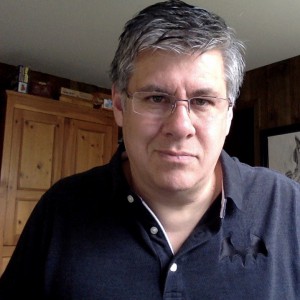 Move your drone racing skills to the next level with these interactive air gates!

Project in progress by RoboCircuits